If you're moving from an iPhone to another smartphone platform, you must first de-associate your phone number with iMessage, not only on your iPhone, but on any other Apple device (iPad, OS X) that you've used it with. Failing to do this means that text messages from other iPhone users will be sent to the iMessage system instead of the standard SMS protocol - and without an iPhone, those messages will simply disappear into the mobile ether. What's worse is that without the original iPhone used to associate the phone number with iMessage (say, if someone sold or broke their original iPhone), there was no way to undo this association.

Apple introduced iMessage in October of 2011 with the launch of iOS 5 and the iPhone 4S. Though users became aware of the problem shortly thereafter, and were quite vocal with their frustration, Apple has never seemed particularly worried about it. The only people experiencing the "vanishing message" bug were those who had just left the Apple mobile platform, after all. The biggest problem was probably that users were never alerted that using iMessage would cause incoming messages from other iPhone users to be sent exclusively through Apple's system, and that this wouldn't stop if their iPhone was no longer used. 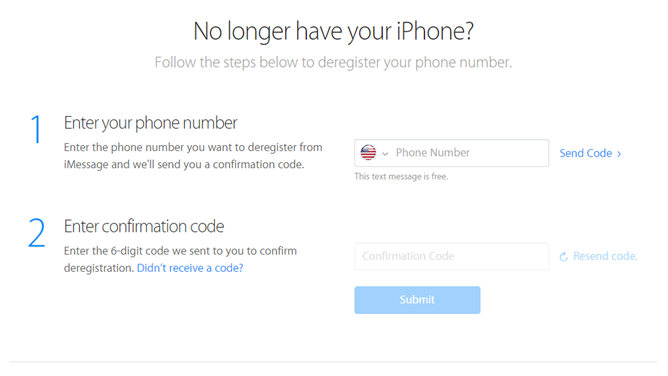 Today, Apple has finally released a tool that lets former iPhone users de-associate their phone numbers from iMessage without having physical access to an iPhone. Once you receive a confirmation code from Apple and send it back via the support site, you should receive standard text messages from iPhone users, which will come in the usual way to any Android phone, Windows Phone, Blackberry, or "dumb" phone.

We must commend Apple for (eventually) acceding to its users wishes and allowing greater inter-operability between smartphone platforms. We couldn't guess what took the company so long, but the timing might have something to do with an ongoing class-action lawsuit alleging that Apple failed to inform customers that switching to other phones would cause iMessage to malfunction. Just a guess. IK Multimedia Announces iRig HD-A And Amplitube For Android, But It's Only Available On The ...