Google appears to have turned on carrier billing support for Three customers in the UK. Though the company has not yet appeared on Google's page of listed partners, a reader has submitted a screenshot of the Play Store giving them the option to pay for Sons of Anarchy later on when their Three bill arrives. 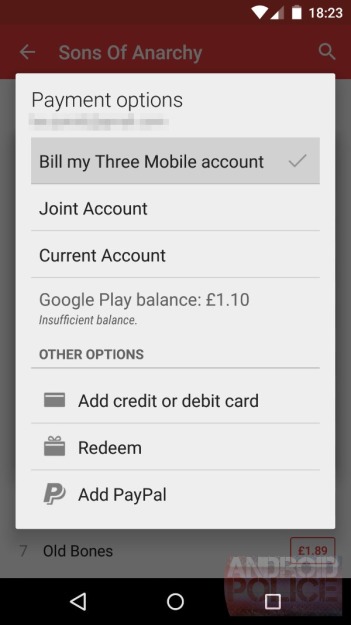 Carrier billing isn't the most common way people pay for apps and Play Store content, but it's a convenient option for those who won't have the money they need until the end of the month or simply don't want to supply Google with a credit card.

If you're a Three customer in the UK, let us know what you're seeing in the Play Store. Is this a feature you've been waiting for?

Asus ZenWatch Coming To The US November 9th, Starting With Best Buy Priced At $199.99