Motorola's been planning a soak test for select users of the Moto X 2014 Pure Edition for a little while now, and it looks like it's officially beginning. Earlier this evening, a tipster shared a shot of the update prompt with us, confirming that the test is bringing Android 5.0 Lollipop to the handset, earlier than Google's own OTAs for existing Nexus devices (besides the new Nexus 9 and unreleased Nexus 6). Motorola has itself uploaded release notes for the update, describing some of Lollipop's new treats for Moto X users. Lock screen notifications, interruption control, screen pinning, and other features we've come to know appear to be in tow. 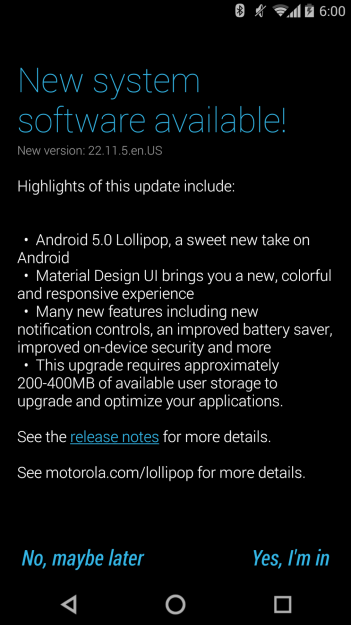 With the rollout apparently just beginning, there's not a lot we can say about Lollipop on the Moto X, but this is certainly exciting news for Moto owners, as it appears the manufacturer is wasting no time in getting updates ready and as the manufacturer of the Nexus 6, it's probably fair to assume that Motorola is well-acquainted with Lollipop by now.

Update: It looks like Moto has pulled the Moto X release notes for the Lollipop soak test, but we've mirrored them below. These notes have also been pulled for now.