Wireless charging may not have taken the world by storm like some of us had hoped, but there's no denying the convenience of this charging method. Those who have gotten used to plopping their phones or tablets on a pad instead of plugging them in swear by it and end up purchasing Qi pads to leave everywhere around their house and office. Whether you belong in that group or you're still tiptoeing around wireless charging, there's a good deal for you today that could bring a new charging pad to your hands at a really discounted price. 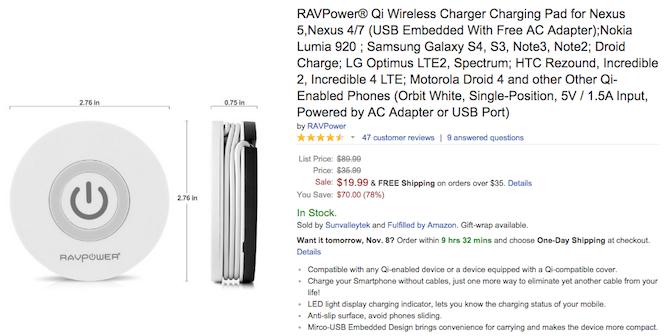 RAVPower's Qi Wireless Charging Pad, which is listed at $89.99 on Amazon (seriously?), but usually goes for $35.99 (way more reasonable), is down to $19.99. The pad has a non-slip ring on top to keep your phone/tablet safe, an LED light to notify you of its charging state, and comes with a very convenient wraparound cable that you can stow away when you don't need to plug it in. When it comes to making wireless charging as minimalistic and as (seemingly) wire-free as possible, this one gets it right.

The RAVPower charging pad will ship for free to Prime subscribers and on orders over $35. It sounds like a good deal if you're planning on getting a Nexus 6 or if your current wireless setup could use some sprucing up.

Primecast Puts Amazon Instant Video Where It Belongs: On Your Chromecast

BeyondPod's Big 4.0 Revamp Buffers To The Play Store, Meets A Stream Of Criticism