When Google launched the Nexus Player, it was listed with a lengthy 3-4 week shipping window, but it seems that Mountain View has gotten its ducks in a row sooner than that. We've gotten multiple tips that Nexus Players and controllers are on their way to buyers. 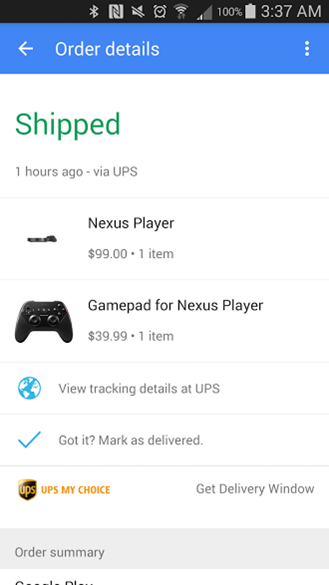 The Nexus Player is Google's first Android TV box, priced at a reasonable $99. The game controller is an extra $40, though. While Android TV is an interesting platform, the Nexus player doesn't seem very well-positioned in the set top box wars. It's really just a way to experience Android TV.

If you took the plunge and bought a Nexus Player, keep an eye on your email for a shipping notification.

[Thanks, Bryan Fuenmayor and everyone else who sent this in]

Nexus 6 Stand Cases By Case Mate Show Up In The Play Store, Listed As 'Coming Soon'