If you're as fed up with the Google Play Store's fumbling of the Nexus 6 launch as everyone else, you now have at least one alternative. Motorola has begun selling pre-orders on its website, at least to the United States. You can order the 32GB model and 64GB model at $649.99 and $699.99, respectively, in both white and blue. According to the site, "availability" of the pre-order is determined when you check out, so just seeing it on the site doesn't mean you'll be able to secure a pre-order. 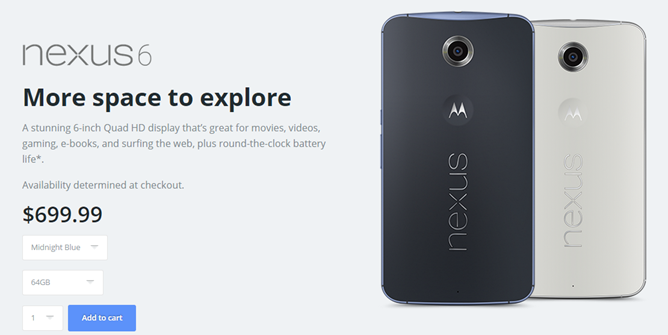 Unfortunately, there's no mention anywhere of an approximate ship date. It could be next week, when the first retailers are expected to get units, or it could be weeks after the Play Store orders go through. We just don't know. The FedEx shipping estimates aren't any help, either.

T-Mobile has announced that it will begin selling the Nexus 6 on Wednesday, November 12th. Other carriers are expected to sell the phone at retail locations as well. Given the extreme demand shown so far, there's no telling how long the pre-orders will be available from Motorola's website.

Update: They're going very quickly. At least some of the 64GB versions are already backordered. Though you can still order a backordered phone, the date goes all the way to November 26th (presumably for shipping), as of 10:40 AM Pacific time. 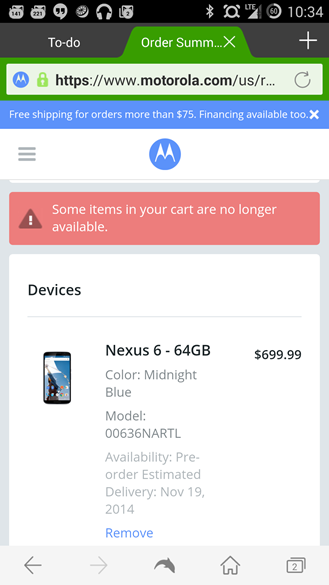 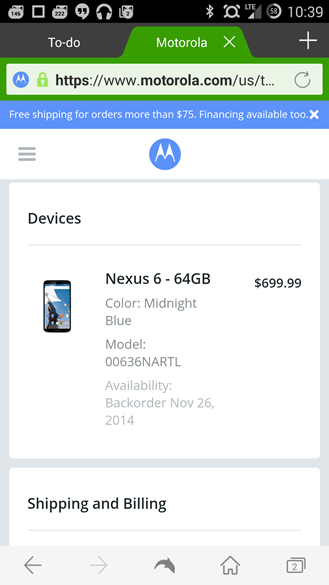 Update 2: As of 10:50 AM Pacific, only the 32GB blue version is still showing as a "pre-order" in the Motorola.com cart. All other models are backordered. Some commenters say that early orders are now showing a November 19th shipping date, while others have an estimated date of November 26th.

Verizon Continues Its Rebranded Tablet Push With The Ellipsis 8: $150 On Contract, $250 Outright