Look, we know most of you are probably more eager to see Lollipop software images for devices that you actually have instead of the ones that have just been released. But Google seems to be taking its sweet time with those, so in the meantime, we've got the software image and binary drivers for the Nexus Player. That's nice, right? Hello? Anyone reading this? 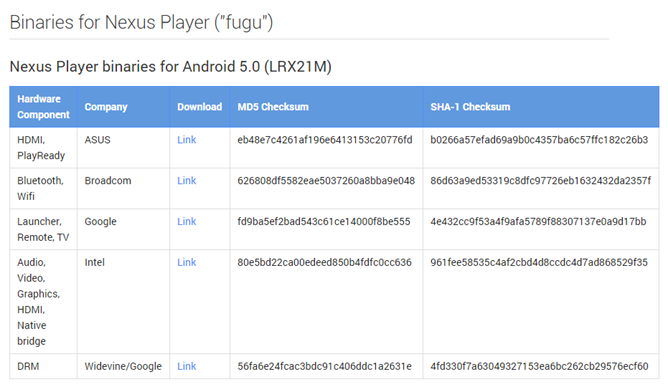 Actually, the software for the Nexus Player will be very important for the future of Google's Android TV platform - this is the showcase device for the next generation of Google-powered set-top boxes, for better or worse. So now tinkerers have a fresh place to start from and eventually return to if they perform some kind of software modification that completely screws up Android TV, not to mention the drivers necessary to start building their own software.

The initial Android 5.0 build for the Nexus Player, LRX21M, is a hefty 423MB. Binaries for the various systems are split into sections based on the components (main board, wireless, graphics) and software (launcher, DRM), assigned by the company or companies that developed them. This is all old hat for Android regulars. We can cross our fingers and hope that at least some of the Lollipop software images come later today for impatient Nexus owners.