Do you have a smartphone? Do you completely rely on it an entire day for navigation, music, gaming, communication, and more? Then you definitely understand the woes of battery life on these modern all-singing all-dancing gadgets. I personally have a charger at home, a dock at work, a car charger, a small portable charger in my purse, but I also like having MOAR POWER just in case I ever need it.

That power comes in the form of a big portable battery, the kind that Anker, New Trent, and Limefuel make. I was a Kickstarter backer on the latter's Limeade Blast L130X, a 13000mAh unit with two USB outputs, a handy carrying case, and a 2-in-1 MicroUSB and 30-pin cable. Over the past year, I've used it during all-day activities like hiking, but also as a replacement to the wall charger while sitting on my summer house's porch. It's been incredibly handy to have.

So when the folks at Limefuel asked if I could review their Rugged model, I jumped at the opportunity. This one promised the same features that I already loved in my L130X with a slightly larger 15000mAh battery, but more importantly, it is water, dirt, and shock proof.

The Limefuel Rugged came in a cool camouflage-inspired box with black, dark grey, and green accents. Inside was the battery, a hook/lanyard, and the 2-in-1 cable. 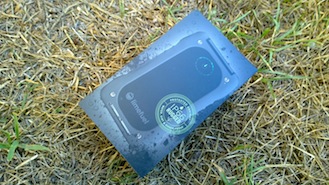 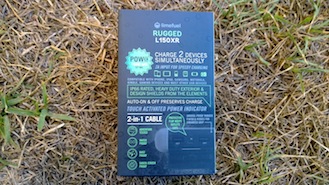 The unit itself is built like a tank, unsurprisingly. Whenever you hear the words "rugged", whether it's a phone or an accessory, you expect robust materials, attention to details, tight seals, and a final package that looks and feels like it could take a round of beatings and come out victorious. The Limefuel doesn't disappoint in that regard. 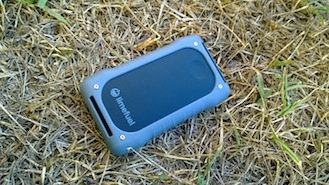 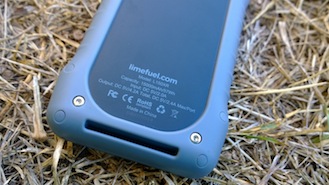 Everything from the way the battery is encapsulated in a slightly padded light grey material to the extremely secure charging ports door, is carefully thought through and executed. The silver bolts on each corner, while probably functionally necessary, also add more to the aesthetic look and rough exterior. If design could talk, this one would scream, "I mean business."

A 15000mAh battery takes its sweet time to charge, that I knew. So everytime I needed to use the Limeade Rugged, I made sure to put it on a charger overnight and it was full the next morning. Some high capacity batteries like the UNU Ultrapak Tour offer fast charging, but as my colleague Michael discovered, that seems to come at the cost of efficiency. The Limefuel doesn't claim fast charging, and charge fast it doesn't. In my experience, it took several hours to just get the battery to 50%. Then I stopped checking and fell asleep. Sorry.

The charging indicator uses a round watch-like meter made of 16 green dashes. However, these light up in quarters, four at a time, essentially only showing you the charging level with a 25% precision and/or error rate. 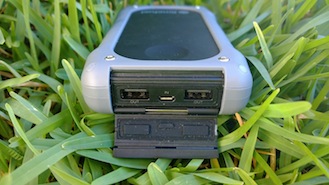 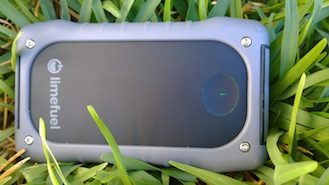 But once the Rugged is completely juiced up, it serves its purpose well. Most batteries claim a certain capacity, but their efficiency is an altogether different story. The Limefuel consistently served up more than 70% of its marketed label, sometimes even reaching 80% by my calculations (well, my gadgets' batteries are a bit worn out, so the math isn't 100% exact).

Out In The Real World

My real life test for the Limefuel Rugged took place while I was traveling to London for a 6-day vacation. I had my LG G2 and a Lumia 1020 (dat camera!) that both needed to be charged and ready from the moment I left the hotel early each morning and until I came back around midnight. With constant GPS and Bluetooth use, WhatsApp conversations running around the clock, Twitter and Instagram firing on all cylinders, multiple phone calls and messages, and photos, so many photos and videos, neither device would have even lasted past noon, let alone midnight.

My solution was to put the Limefuel in my bag, have a cable running out of it and into my front jacket pocket where either phone was charging at any moment (while the other was in my hand being used). I went on a boat ride in Hyde Park, bumped into thousands of people in the Underground, walked under the rain, leaned against walls, threw my bag repeatedly on the floor, climbed a lion statue, and never once did I stop to think if the battery could handle it. I'd seen enough YouTube videos of the Limefuel being driven on by trucks, dunked into water, and bounced on sand to know that it would scoff at my "rough" use.

That's the kind of peace of mind I had with this battery. Would I have done the same with the non-rugged Blast L130X? Probably not. I'd have to be a bit more careful. 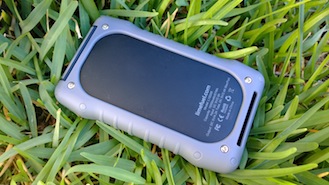 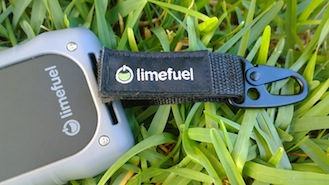 Another cool feature of the Limefuel Rugged came into play when I was back in my hotel room. I only had two UK-compatible wall chargers but four gadgets to fill up: the Limefuel, the G2, the Lumia 1020, and my LG G Watch. Did I want to wake up in the middle of the night to take two of them off and put the remaining ones? Uhm, no. I was so knackered that I couldn't even if I wanted to.

The trick was to hook up the Limefuel directly to the wall charger and use its two ports to charge my LG G2 and G Watch. Thanks to passthrough charging, the Limefuel would first fill up the gadgets then start its own charging process. The second wall charger was dedicated to the Lumia 1020. Problem solved. Every morning, I'd have all my gadgets at 100%, and the Limefuel would have had enough time to fill whatever had been emptied during the previous day's excursions.

To further test the Limefuel's ruggedness, I had the opportunity to put it under a quad and have someone drive over it with both wheels. I admit I was slightly scared for a second because I had been pretty careless about the sand and grovel situation when I placed the battery on the ground. But then again, if your gadget is really rugged, it should be able to handle a situation as unexpected as this. Carefully placing it on some clean and even sand wouldn't have been accurate, would it?

As you see, it took it like a champ. There were scratches on the back of the battery as a result of it grinding into the uneven ground and stones, but the top of the battery, the one that got stepped on by the quad is still surprisingly intact. And it still charges and works as it used to. Move along people, it was just a quad. 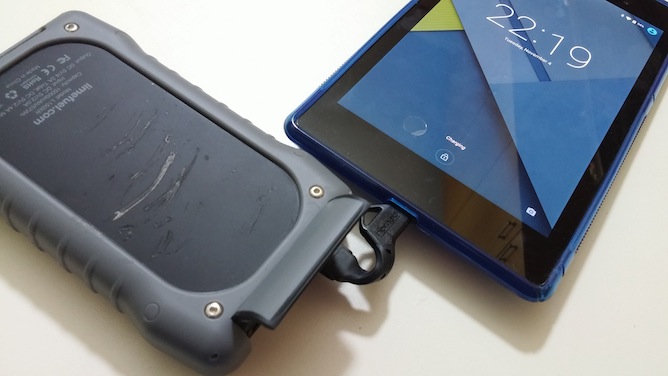 Love/Hate With A Cable

You're wondering why I'm dedicating an entire review section to a cable. I'm crazy like that. But also, there's an entire story with that cable, so hear me out.

When I first unboxed the Limefuel Rugged, I fell instantly in love with its 2-in-1 cable. It seemed to have everything right. It uses a flat design to avoid tangles, comes with an attached green cable wrap, and has a clever 2-in-1 adapter system. At first, you only see a Lightning adapter. You pull it out and swivel it around to reveal a MicroUSB tip. Ingenious. That cable would be a welcome addition to any gadget bag, purse, backpack, or small pouch. 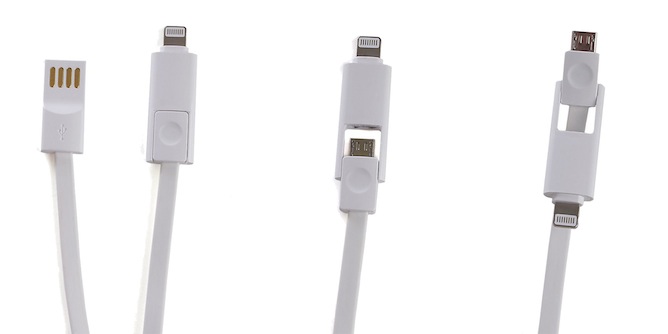 The problems arose when I tried using the cable during my trip. As I explained, I had the Limefuel in my bag and the cable running out of it and into my pocket to charge my phones. Since I was only using the MicroUSB adapter, I had the Lightning part pulled out and flipped around. This adapter actually attaches in a very flimsy way when it's not plugged into the MicroUSB portion, plus I was taking my phones (and thus the cable) constantly out of my pocket. You know where this is going, don't you? Before the end of the first day, the Lightning adapter was nowhere to be found. It must have caught on my pocket and unhooked from the rest of the cable at some point.

By the middle the second day, without any other change in my use, the MicroUSB tip had split in half, was crooked, and couldn't reliably charge my phones. For the rest of the trip, I simply used a MicroUSB cable I've had since 2008 and I had no problems whatsoever. 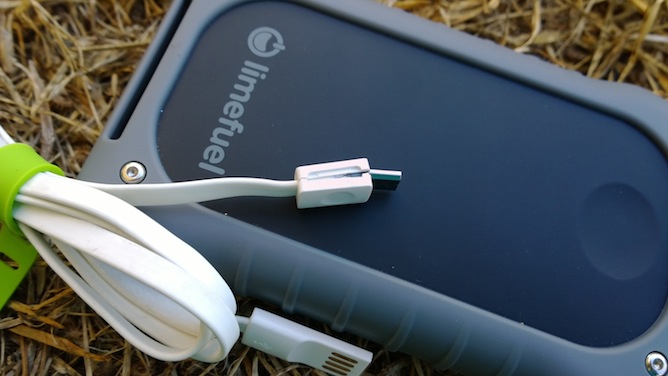 And this is how my cable looked after 2 days of use: no Lightning adapter and the MicroUSB tip is broken.

I am a very careful person, but I was on vacation, meeting dozens of people and doing multiple activities per day. Looking after a cable wasn't exactly on my agenda. I would have accepted my mistake and forgiven this problem had this not been a rugged unit. By definition, it is supposed to be used in rough conditions. Moving it in and out of a pocket? I wouldn't call that rough or extreme usage.

That cable may be perfect for Limefuel's Blast series, but for their Rugged unit? Just no. The company needs to toughen up its materials and improve its 2-in-1 attachment system when the Lightning adapter is pulled out.

I'll keep this simple. If you want a portable battery that can withstand the elements and be used during outdoor activities, you can't go wrong with the Limefuel Rugged. It has the tough exterior, the efficient juice usage, and the reliability to serve its purpose every time you ask it to. The only issue with the "rugged" status of the Limefuel is its cable. But that shouldn't make or break the product since you can easily use any other cable you have around the house.