The wounds are still fresh from Google's somewhat disastrous Nexus 6 launch last week, but the company is trying to get things back on track. The Nexus 6 page on the Play Store has been updated with a promise that Google is working to get more stock, and it's aiming to have some phones ready to go each Wednesday. 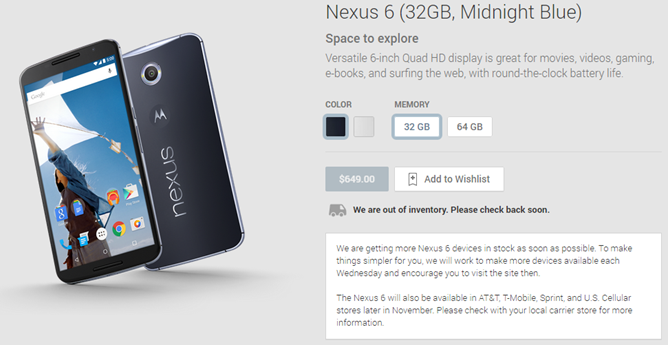 The message on the Play Store is as follows.

We are getting more Nexus 6 devices in stock as soon as possible. To make things simpler for you, we will work to make more devices available each Wednesday and encourage you to visit the site then.

The Nexus 6 will also be available in AT&T, T-Mobile, Sprint, and U.S. Cellular stores later in November. Please check with your local carrier store for more information.

So there might be more Nexus 6s in stock as soon as tomorrow, but no specific time was listed. At least you'll be able to give it a shot each week going forward, but Google also points out AT&T, T-Mobile, Sprint, and U.S. Cellular will have the device in stores later this month. Note that Verizon is absent from that list. It's looking like Big Red will activate a Nexus 6 purchased from Google, but it won't sell the phone directly.