The HTC Desire EYE is a quirky camera that appears to be worth a look, especially when it's looking back at you. This phone is notable not for its specs (though those are nice too), but its 13MP front-facing camera. That's right. HTC has decided that this handset will be able to capture as many pixels from the front as it can from the back.

AT&T will also carry HTC's quirky RE camera, a 16MP shooter with a 820mAh battery that can record 1080p video for around an hour and forty minutes. This inhaler-shaped sporty device is rated IP57, so it can survive in up to one meter of water for 30 minutes without a case. 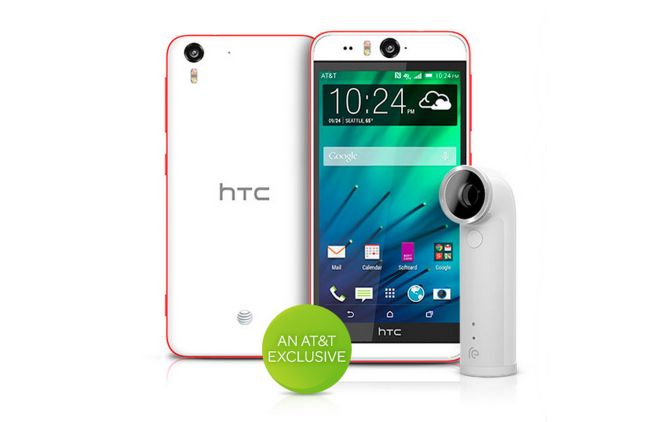 The RE is going on sale on November 7th as well, and like the recently-announced Moto X/Moto 360 deal, AT&T will sell you one for $50 off if you purchase it with an HTC Desire Eye (as long as you're pairing it with a two-year contract or Next plan). This should bring the RE's cost down to $149.99.

Stay in the Spotlight this Holiday Season with the HTC Desire® EYE, Available Exclusively at AT&T on Nov. 7

DALLAS, Nov. 3, 2014 – Get the Desire EYE and RE by HTC in time for the holidays. AT&T today confirmed that the HTC Desire EYE and RE will be available for purchase beginning Nov. 7 at www.att.com and in AT&T retail stores.

Additionally, customers can save $50 on a RE by HTC, a 16MP point and shoot camera, when they purchase the HTC Desire EYE on an AT&T Next plan or a two-year agreement.

“Optimized for taking selfies, HTC Desire EYE is AT&T’s first smartphone with a 13MP front-facing camera and a dual LED flash,” said Jeff Bradley, senior vice president – Device Marketing and Developer Services, AT&T. “Both HTC Desire EYE and RE have many great features that allow you to capture your moments – all on the nation’s most reliable 4G LTE network, covering more than 300 million Americans.”

HTC Desire EYE comes outfitted with a powerful 2.3 GHz Quad-Core processor, a 2400mAh battery, 16GB of on-board storage and up to 128GB additional storage with a microSD™ card (sold separately).

The HTC Desire EYE earned four out of five stars on AT&T’s Eco-Rating system. The system, which rates the environmental factors of AT&T branded handset devices, was created to empower consumer choice around sustainability. For more information about this device’s rating, AT&T’s Eco-Rating System, and how you can join AT&T in making a difference, please visit http://att.com/ecospace.

RE, a point and shoot camera, comes with a 16MP camera sensor with a 146 degree wide-angle lens, and effortlessly integrates with your smartphone and user settings to automatically back up your photos and videos to the cloud. An 820mAh rechargeable battery supports 1 hour and 40 minutes of continuous 1080p High Definition recording capability.10 Additional key features include: