No release of Android feels complete until it's sitting in AOSP. The time has come and Google is now uploading Lollipop to the Android Open Source Project. That's every line of code, every resource, and every config file – the result of a year of work by Google's crack team of developers. Given the likely size of this release and everything we've seen in the past, this code dump could take several hours to complete. 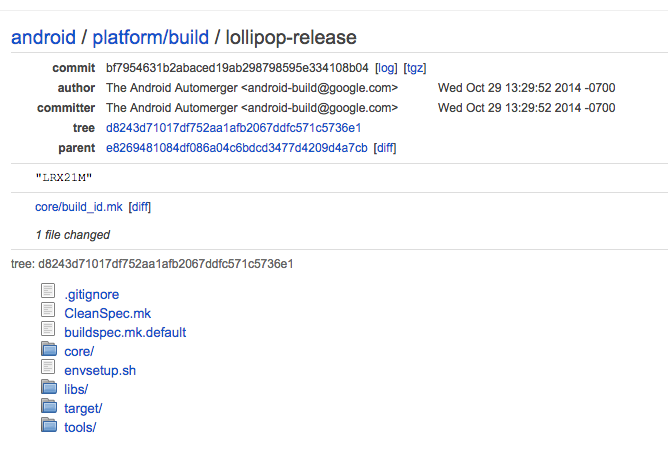 The new branch is titled lollipop-release. The official release tag hasn't been posted yet, but it should be named android-5.0_r1 [it's android-5.0.0-r1 and android-5.0.0_r2] when it hits. The build number is LRX21M, as seen in platform/build. We should also see updates appearing in the device-specific repositories for all of the Nexus hardware going back as far as the 2012 Nexus 7. This post will be updated with links as they appear.

Device repositories have been added for the Nexus Player (fugu + kernel), Nexus 6 (shamu + kernel), and the Nexus 9 (flounder + kernel) There is also a new device repository named atv, most likely for the ADT-1 running Android TV. Repos have also appeared for the 64-bit support on the ARM and x86_64 platforms.

Once the code has been fully uploaded, we'll be on the lookout for new information and hidden goodies. A changelog with comments from each code change will probably be posted by Al Sutton later tonight or tomorrow. Of course, if we've learned anything from the release of Ice Cream Sandwich 3 years ago, it's that we can't begin to recognize all of the implications of an update this large for a long time.

Let's give a hand to everybody on the Android team. They've got to be breathing a sigh of relief after all that hard work. On the other hand, many of them are surely gritting their teeth in preparation for the bug reports to begin rolling in.

Update: Glenn Kasten just made a post on the Android Building Google Group to let developers know there are some updates to the documentation for building Android 5.0 from AOSP. The changes include things like SELinux and Encryption, properly supporting the new Camera and Audio APIs, completely rewritten documentation for Sensors, and brand new information related to TV.

Update 11/4: The upload appears to be finished. Al Sutton has generated a changelog for all of the commits that lead up to LRX21M. Thanks to a post on the Android Building group, we also know that there's still a bit more to come for most of the Nexus family; the r1 and r2 tags only represent the builds that are being shipped on the Nexus 9 and Nexus Player, respectively, but may not be complete for the versions that will roll out to the rest of the Nexus family. The development branch for 5.0 is now also available under the name lollipop-dev.

Microsoft RemoteIE Lets You Test The Latest Version Of Internet Explorer On Android (And Other ...

Pocket v5.7 Brings Support For Lollipop And A New Look With Material Influences