Now when you send a message by mistake, you can simply tap the retract button. This works both before or after the text has been viewed, so even if you weren't able to prevent your ex from seeing that kissy face emoticon you intended for your new significant other, you can at least strike it from the record. Similarly, you can prevent yourself from accidentally messaging something grossly inappropriate to your boss.

To demonstrate this, here's a guy who probably wouldn't look out of place in an Old Spice commercial.

As mentioned towards the end of the video, you can also set a timer that determines how long other people have access to certain messages and images. The content will not appear until a recipient presses down and holds onto the chat. The message will then disappear after the time limit has expired or they lift their finger up from the screen. BBM can't prevent them from taking a screenshot, but it will shoot you a notification if it detects that one has occurred. 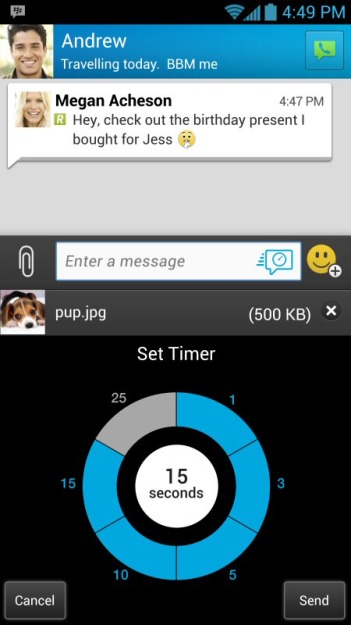 The new things don't stop there. This update makes picking stickers easier and shows what music your friends are listening to in feeds. And when someone sends you an image, you can request an HD version with more detail. Here's the change log.

Editors' Note: There is a photo and a video associated with this release.

BlackBerry Limited (NASDAQ:BBRY) (TSX:BB), a global leader in mobile communications, today announced that it has released several new features for BBM™, offering users new ways to chat and share with more privacy and control over their communications.

At the core of the BBM experience is privacy and control. These two notions are more important today than ever before as people are looking for simple ways to help guard against their messages getting into the wrong hands or being seen by anyone other than the intended recipient. New features for BBM introduced today enable users to communicate with more discretion and freedom. Features introduced today include:

"These new enhancements to BBM were highly requested so we're excited to be delivering them to users today," said John Sims, President Global Enterprise Services at BlackBerry. "These capabilities will allow our users to be more creative in how they deliver their messages while also being confident that their content is kept private and seen only by its intended recipient."

Today's announcement underscores the commitment to making BBM a world class privacy-focused instant messaging application. New features are available for download over the next couple of days for BlackBerry 10 smartphones, iPhones and Android smartphones by installing the latest BBM update in BlackBerry World, Apple App Store and Google Play. For more information, visit the Inside BlackBerry Blog and check out new BBM videos on the BlackBerry Youtube Channel.

HTC Copies And Pastes Its File Manager Into The Play Store

Haunt The House: Terrortown May Be The Perfect Spooky Accessory To Your Halloween Night