This shouldn't come as a surprise: Xiaomi has been on a roll for the past year. Before snatching the third global spot, it had already surpassed LG as the world's fifth largest smartphone manufacturer in Q2 2014 — only three months ago. It also overtook Samsung in China, becoming the country's biggest vendor. That win was guaranteed to catapult it in the global ranks, and so it did. With 17.3-18 Million (depending on which report you read) smartphones shipped this past quarter, it has pulled ahead of Lenovo (16.9M), LG (16.8M), and Huawei (16.5M).

That's not an earth-shattering lead yet, but given Xiaomi's growth rate (over 200% year-over-year, compared to the others' below 50%), its position should be strengthened in the next quarters. Add the fact that the company has been planning to expand to even more countries, and we may soon see it getting closer to Apple (39.3M) and the second spot. Samsung is still sitting rather comfortably in the lead with 78.1 Million units. That's quite a long way to go.

For now, Xiaomi and its 17-18M unit shipments make up over 5% of the global marketshare. Think about it like this: 1 out of every 20 smartphones shipped between June 1st and September 30th in the entire world carried the Xiaomi brand. That's no easy accomplishment for a company that only caters to a few countries and does some of its business through blink-and-you-miss-them online sales. 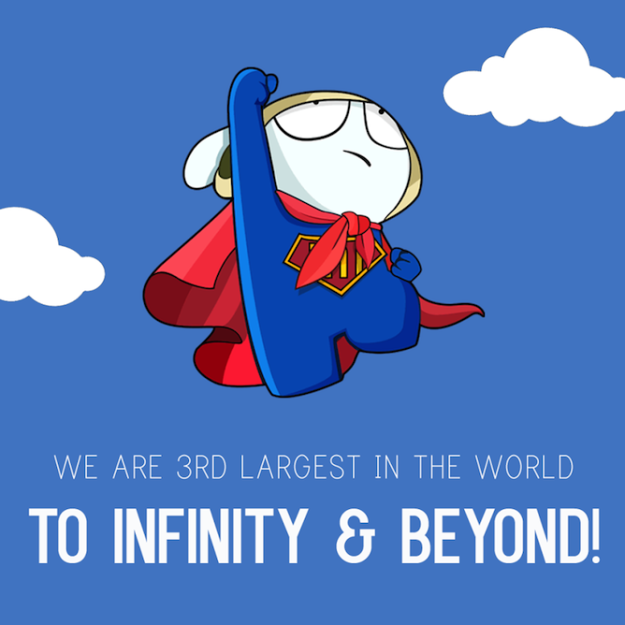 As a celebration, Xiaomi's Google+ account shared a cute graphic of a victorious Super MiTu who wants to go "To Infinity & Beyond!" and is already high up in the clouds. The Super MiTu, if you don't know him, is the company's signature rabbit mascot dressed with Superman-like clothes (with Mi emblazoned on his torso) and wearing a bomber hat — it gets cold up in the stratosphere and a shivering superhero rabbit is rather useless. MITU might mean other things in urban American speech, but for the purposes of education you'll be glad to know that he's called MiTu because Tu is a rabbit in Chinese. And that's your fact of the day.

Update: With Lenovo's acquisition of Motorola being complete, their total smartphone shipments put them at 25.6M devices (16.9M for Lenovo plus 8.7M for Motorola), taking the third spot away from Xiaomi. That was a rather short celebration, MiTu! — Thanks Malcolm!

Runtastic Gets Updated With Fit Integration, Will Synchronize Your Activity's Stats With ...