Move over, Sharp: LG wants to claim your crown for the "world's thinnest bezel." Modern smartphone designs are bumping up the screen and slimming down everything else, as evidenced by the latest flagships from, well, just about everywhere. LG is hoping to continue that trend with its proprietary "Neo Edge" design. The first production screen in the series is a 5.3-inch 1080p panel with bezels of just .7mm. That's about as thin as the graphite in a typical mechanical pencil.

That's not quite as magical as it sounds. Like the screen on the eye-catching Sharp Aquos Crystal, the controller and connective layer for the screen still need to be embedded on one side, leaving that thin bezel around only three edges. And the engineering and production realities of actually making phones mean that glass, metal, and plastic would probably account for at least another millimeter or two added to a phone's width. The prototypes below do a good job of illustrating typical top and bottom bezels, accounting for hardware components like speakers, microphones, cameras, sensors, and capacitive keys. 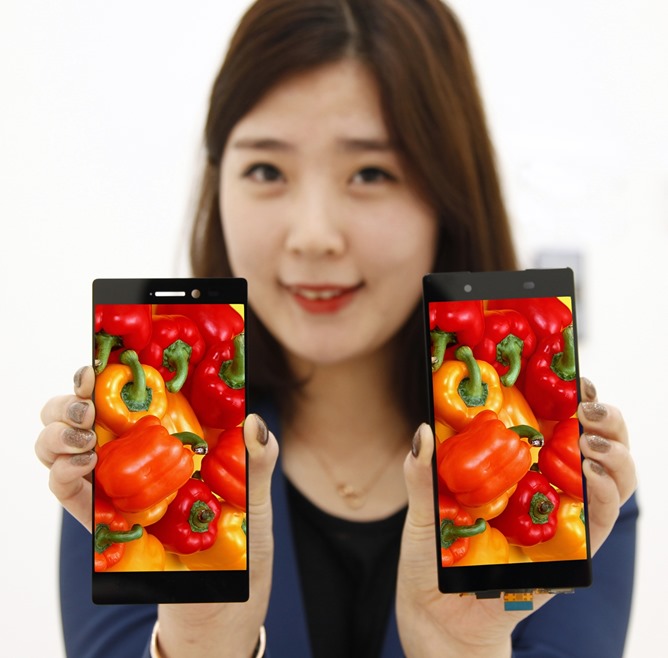 But as LG has proven with the G3, it's already very skilled at slimming down the X axis of its devices as much as possible. The Neo Edge screens are also waterproof and dustproof, and the adhesive design keeps more light from leaking. According to the press release from LG Display, production on the new screens will begin next month. LG Display operates independently from LG Electronics and sells components to other companies, and its says the first OEM orders have come from Chinese customers. Even so, it's a safe bet that we'll be seeing this screen in LG phones some time next year, possibly as soon as CES in January.

Seoul, Korea (Oct. 30, 2014) – LG Display, the world’s leading innovator of display technologies, announced today that it has developed a 5.3-inch Full HD LCD panel for smartphones with the world’s narrowest bezel at 0.7mm. With this cutting-edge display, LG Display continues to lead the market in high-resolution large-size displays for mobile devices.

“With the growing trend for large screen smartphones, customer demand for displays with a narrow bezel is increasing, because it enables users to enjoy the maximum use of screen area without compromising excellent grip and design,” said Byeong-koo Kim, Vice President and Head of IT/Mobile Development Group atLG Display. “With this innovative product having many advantages, ranging from its narrow 0.7mm bezel and high resolution picture quality to its slim design and touch-embedded solutions, LG Display will continue to lead the growing market for large screen smartphones, meeting the expectations of customers and users by enhancing the quality of devices,” said Mr. Kim.

To realize the 0.7mm bezel width on the left and right sides of the panel, which is narrower than the 0.8mm thickness of a credit card, LG Display used its “Neo Edge” module processing technology and the world’s first “Advanced In-Cell Touch (AIT)” technology.

LG Display’s Neo Edge technology uses an adhesive instead of double-sided tape to attach and completely seal the total area and edges of the panel’s circuit board and backlight unit. Because there is no plastic guide panel to attach the panel and backlight, the Neo Edge technology helps achieve minimal bezel width, while blocking light leakage and being waterproof and dustproof.

The adhesive seal also prevents corrosion that sometimes occurs along the edge of the glass panel when double-sided tape is used, while dramatically improving the panel’s durability despite the narrow bezel because of increased elasticity as the adhesive hardens.

The company’s AIT technology, exclusively developed by LG Display, reduces the need for bezel space because the touch panel is embedded into the LCD module. The technology offers a slim design and excellent touch, while saving costs since a separate process for touch functions is not required.

LG Display will start mass production of the product in November and supply it first to customers in China, where demand for large screen smartphones is strong, while actively promoting it globally.