If you use a Nexus 5, or even if you can just get your hands on one long enough to add your Google account, you might want to investigate the Google Play Movies & TV app. According to posters at Slickdeals and our own devices, owners of the N5 are being treated to a free digital copy of the 2013 astronaut thriller Gravity. Just open the app and tap "add to library," and it's yours to keep and play back on any Android device or browser. It's even being given away in HD. 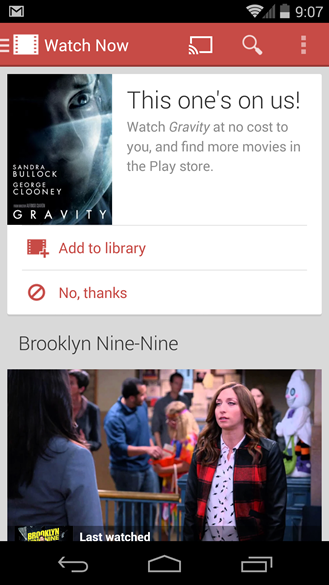 This does seem oddly limited to the Nexus 5 - we've tried it on other devices, including the OnePlus One, the Nexus 7 2013 running the Android L preview, the LG G Pad 8.3 Google Play Edition, and the DROID MAXX, and all of them seem to be offering Shaun The Sheep: The Big Chase instead. (It might be possible to fool the app with a root edit of your build.prop file, if you think a $10 movie is worth it.) Given licensing agreements and Google's generally parochial approach to digital content, it's also likely that this promotion is geographically limited, perhaps to the United States alone.

While you can't complain about free content, I think a lot of users would rather have the more recent release with seven Academy Awards under its belt. If you've been given Gravity on anything other than a Nexus 5, or if you're outside the US, please let your fellow readers know in the comments section.