Today is a good day if you like big, powerful phones, and if you want (or need) to use them on Verizon. The Galaxy Note 4 and the Xperia Z3v, the current flagships of Samsung and Sony, have both launched on Big Red. You can pick up a Galaxy Note 4 for $299.99 with a new contract or a whopping $699.99 without one. The Xperia Z3v is slightly cheaper at $199.99 and $599.99. Both phones are eligible for interest-free financing via the EDGE program. 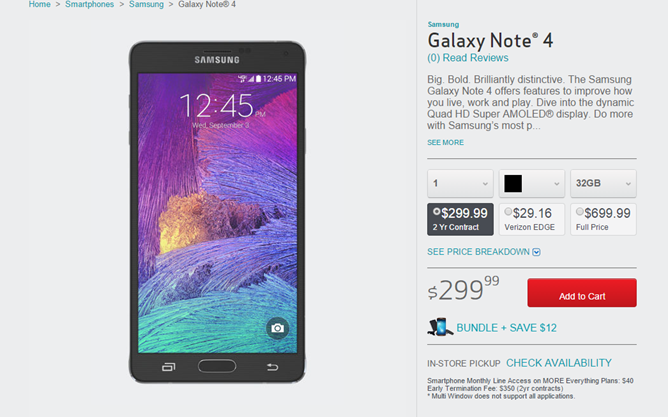 The Note 4 is the current device to beat, at least in terms of raw specifications. Its 5.7-inch screen isn't any bigger than last year's model, but the 2560x1440 AMOLED screen is Samsung's sharpest available on a phone. It's also rocking the latest Snapdragon 805 processor, 3GB of RAM, 32GB of storage by default, and an upgraded 16MP camera. The usual Note family traits are here, including an S-Pen stylus, MicroSD card support, and a removable battery, but easily the most exciting thing about this year's model is the aluminum frame and sides. The phone runs Android KitKat at launch with Samsung's software on top, and it's available in black and white. For an exhaustive look at the AT&T version of the Galaxy Note 4, check out our review. 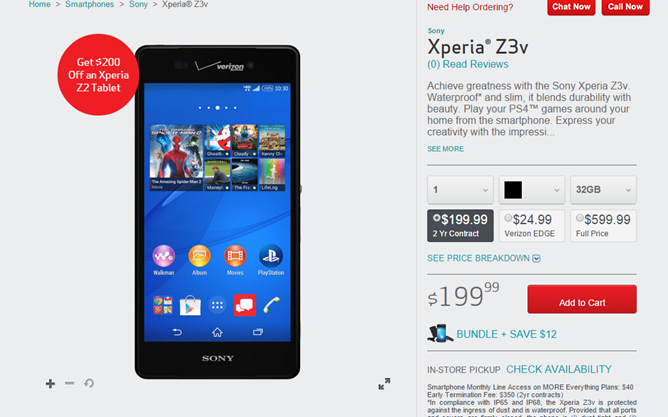 The Xperia Z3v is a stranger beast. Technically part of Sony's Z3 family, the Verizon version actually shares some DNA with the older Xperia Z2, as noted by some observant members of the Android community. While the Z3v gets the upgraded Snapdragon 801 processor and 3GB of RAM from the Z3, it appears to share a similar frame with the Z2, which has a slightly larger battery and a thicker body. The Verizon version of the phone includes Qi wireless charging, which the international Z3 lacks, but its 20.7MP Exmor camera has half the low-light performance with a still-impressive 64000 maximum ISO. Other specs include a 5.2" 1080p screen, Android 4.4, and MicroSD card support. The Xperia Z3v comes in black or white, and customers can get a discount on a Verizon Xperia Z2 Tablet if they buy a pricey bundle.

Just for the sake of comparison, Motorola's Moto X is on sale at Verizon for $100 on contract, as is the LG G3, but the latest HTC One M8 will cost you $200. In the same realm of super-powered phones, the Nexus 6 will be available on Verizon, but we don't yet know if the $649 device will be eligible for a subsidy.