T-Mobile is currently pushing out an over-the-air update to its version of HTC's flagship phone that bumps the software up to Android 4.4.4. Interestingly enough, getting the latest version of KitKat isn't the highlight of this release. This OTA also comes with the suite of features bundled together as the HTC Eye Experience, which the manufacturer detailed in a selfie-themed event where it unveiled the Desire EYE.

The Eye Experience, which we've previously detailed more in-depth, introduces numerous features that range from useful to just plain gimmicky. Useful: Face Tracking, the ability to keep up with up to four faces during a video chat at once and show them to a recipient in a split screen. Gimmicky: Face Fusion, which lets you blend your face with another person's, a feature that parents might explore to see how their future children may look (but even there it's only useful enough for a quick laugh or, equally likely, fright). Useful: Split Capture, the option to record what's going on through the front and rear camera at the same time.

The innovations don't stop there, and naturally people will disagree over which ones are enticing and which aren't. 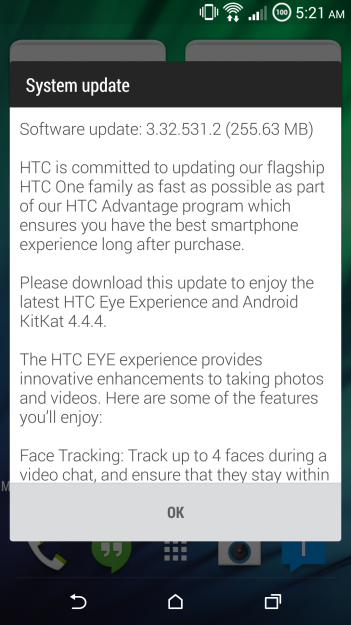 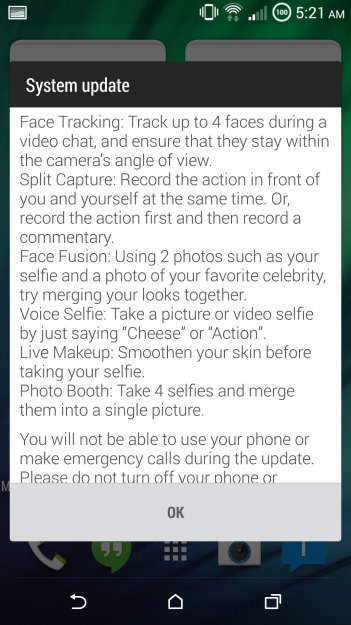 The full update is coming in as a 256MB download. These things generally arrive in waves, so you may have to wait your turn if a notification doesn't pop up right away.