There are big phones, and there are big phones. When the Galaxy Mega hit store shelves last year, it handedly qualified as a big phone. The handset was larger than the Note 3, and the latest iteration remains a device for folks who want something substantial without a massive price to match. AT&T has announced that the Mega 2 is coming to the carrier on October 24th for $474.99 outright, $149.99 with a two-year contract, $23.75 a month with Next 12, or $19.80 monthly with Next 18. 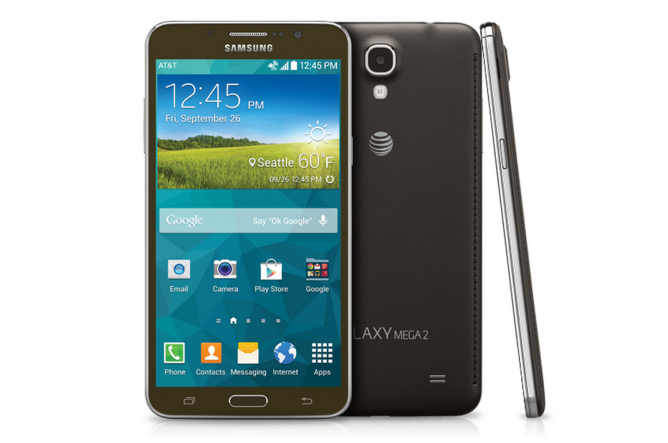 Throughout 2014, Android devices rolled out one after the other boasting how they were slightly larger than they were in 2013. This isn't the case with the Mega 2. This phone has actually slimmed down slightly, going from a 6.3-inch display to something just under six. The screen resolution remains the same at 720 by 1280, and the rear-camera is looking pretty familiar at 8MP.

Internally, the phone isn't all that different from its predecessor, though the battery has actually decreased to 2800mAh (down from 3200). On the outside, the story is different. The device now has squared-off corners and a faux-leather back that puts it more in line with Samsung's current crop of phones. The menu button has turned into a recent apps one.

The Mega 2 doesn't compete with the flagships of the world, but it remains a more affordable way to get a large phone without the usual phablet price.

The Galaxy Mega 2 is designed for those who want to get the most out of their large-screen smartphone, featuring a 6-inch High Definition screen with a smaller overall “just-right” size and one-hand operation mode that puts most everything within easier reach.

The new Samsung Galaxy Mega® 2 is set to join the nation’s most reliable 4G LTE network on Oct. 24. It features a quad-core processor for speedy multi-tasking and responsiveness along with the added benefit of battery management features.

You can also receive a $100 bill credit when you activate a new or existing line of service on AT&T NextSM with a smartphone.

The Galaxy Mega 2 is designed for those who want to get the most out of their large-screen smartphone, featuring a 6-inch High Definition screen with a smaller overall “just-right” size and one-hand operation mode that puts most everything within easier reach. It also includes key features such as: