A couple of the more popular aftermarket additions to Android have been added in Lollipop's pull-down Quick Settings menu. If you regularly flash a custom ROM or add in a widget from the Play Store for easy access to a battery percentage readout or a flashlight (camera LED) toggle, well, you won't need to in Android 5.0. Both of those functions are available in Quick Settings, as seen on the latest Lollipop Developer Preview on the Nexus 5.

If you haven't played with Android 5.0 yet, one of the more visible interface changes is the new combined notification drawer/Quick Settings menu. It's accessible either by swiping down from the top of the screen, or expanding notifications with a single finger and then dragging down a second time. Though the battery percentage isn't shown in the always-visible battery icon in the status bar, the exact percentage will now slide out along with the link to the full Settings page when the Quick Settings view is activated. Tap the percentage to go straight to the battery settings screen.

P.S. For those of you who want an always-on battery percentage without using a widget or modification, the hidden percentage toggle from Android 4.4 seems to be intact in Android 5.0. You can use the current Play Store apps to enable this, even without root permissions, on the Developer Preview builds.

There is also a toggle for the flashlight built right into the Quick Settings menu, which is something that's already a popular function in custom ROMs and root-enabled tools like GravityBox. Nexus 7 2013 owners who have flashed the developer preview don't have access to this because, well, the tablet doesn't have an LED flash. Presumably Android 5.0 will detect the presence of an LED light in the hardware and show or hide the handy button accordingly. 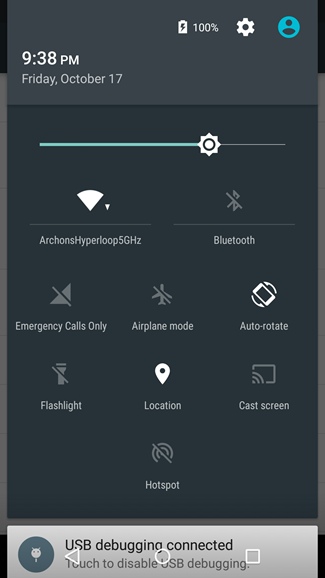 Some other interesting options are enabled only after you manually select them. For example, a Wi-Fi hotspot toggle is now included in the Quick Settings menu, but only after the first time the user enables the Wi-Fi hotspot manually in the full-screen settings app. See above. Other new options include a rotation toggle for phones, which, again, was a popular aftermarket software addition.

[Lollipop Feature Spotlight] WebView Is Now Unbundled From Android And Free To Auto-Update From ...