People use Twitter to share just about everything: mundane thoughts, witty commentary, pictures of food, and their favorite sounds. That last bit is the only part of this list that requires a user to jump away from the app. Now the company is addressing that. Twitter has rolled out Audio Cards, a way for users to stream music and other sounds directly within the Android app. 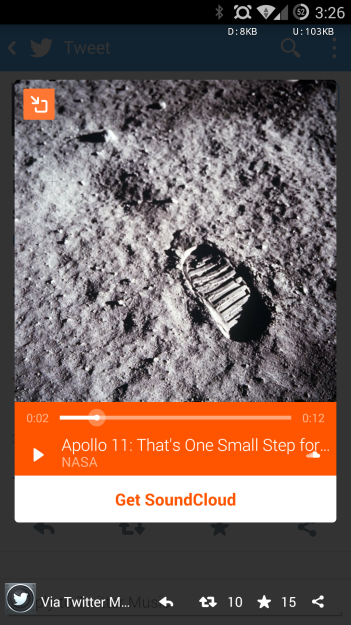 The experience is not all that dissimilar to how Twitter handles images. When someone shares audio, a thumbnail gets embedded beneath their tweet. Clicking on that image will enlarge the card and start playing. Users can then dock the card so that they can continue to peruse their feeds while the audio plays.

Twitter is working with third-party services for audio delivery, and it has announced SoundCloud as its first partner. Shortly after, it followed up with iTunes. Hit up the links below for a look at some of the people who are already tweeting out music, podcasts, and other sounds through these partnerships.