There's no shortage of ways to track your data while working out, especially when it comes to things like running and cycling. There's Runkeeper, Map My Ride/Run, Endomondo, Strava, and many others. Which one you choose really comes down to personal preference, but each has its own set of benefits and features that may make it a better fit into your life. Personally, I've been using Runtastic since I reviewed the Orbit a couple of months ago, and settled in with the company's dedicated road cycling app after getting the Runtastic-branded Speed & Cadence Sensor and Heart Rate Monitor. Both devices pair with the phone over Bluetooth and sync automatically with the Runtastic Road Biking app, so after the initial setup it's all easy-peasy.

I mentioned in my What We Use 2014 post that I was looking into upgrading my 2013 Specialized Sirrus. That time has come and gone, and I switched to a 2014 Specialized Roubaix SL4 Disc a few weeks ago (shown below). I figured this was the perfect time to really see what the Runtastic's sensors are all about, and they've proven to be quite useful. 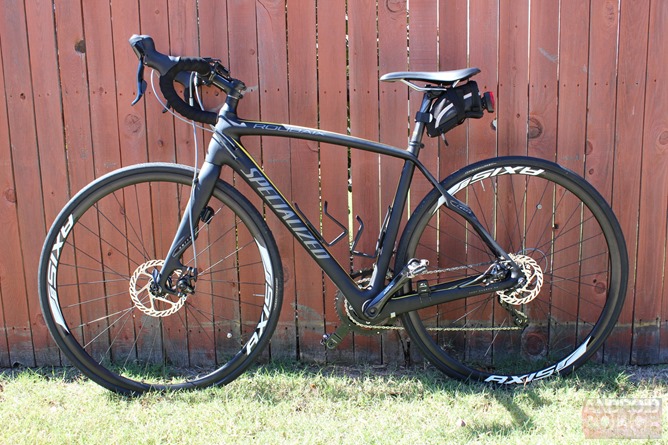 From what I can tell, these sensors are essentially re-branded versions of the Wahoo Fitness sensors. In fact, both units paired perfectly with Strava when I gave that a shot, so neither device is exclusive to Runtastic's apps (though I'm not sure why you'd elect to buy the Runtastic stuff if you don't actually use the Runtastic app). That said, this review will only discuss using the sensors with Runtastic's apps.

First off, a little explanation of what a Speed & Cadence Sensor actually is may be in order. This is a sensor that allows a cyclist to determine how fast they're traveling, as well as the RPMs in which they're pedaling. The latter can actually be crucial for more "serious" cyclists, especially as they train for races or long-distance rides. Cadence information can prevent premature fatigue by better helping the rider maintain a steady spin, which is essential most of the time. Like with other endurance-based sports, pacing yourself is key, and a cadence sensor can help with that. 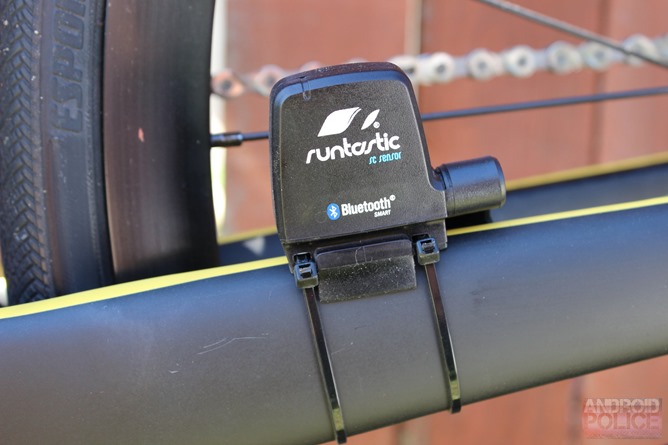 On the speed side of things, you may be asking yourself why a sensor like this is necessary, considering your phone can already provide speed information without a dedicated gizmo. This one is for accuracy purposes: since the sensor is calibrated to the wheel size, it's more accurate than a GPS chip's detected speed. That's the short answer, anyway.

Lastly, let's look at how the Speed & Cadence Sensor works. It's actually really simple: a rubber band with an embedded magnet attaches to the bike's crank arm (behind the pedal), and the sensor itself attaches to the chain stay to detect cadence. There's also an additional magnet that attaches to one of the spokes on the rear wheel, but we'll get to that in a second. It's worth noting that both magnets need to be very close to their respective sensors without actually touching them in order to work correctly.

The unit is comprised of two parts: the cadence sensor and the speed sensor. The former is the "front" part of the overall unit, and is the largest part of the overall device. The magnetic band on the crank arm should be lined up with this part of the sensor – each time the magnet passes by, the sensor detects it, which indicates one full rotation. It's brilliantly simple.

The speed sensor works in much the same way. The magnet attached to a spoke on the rear wheel passes by the speed sensor arm (which is typically nearly flush with the chain stay), indicating a full rotation. The more frequent the rotations, the faster the speed. The wheel size is then calibrated inside of the Runtastic app. See how that's more accurate than relying on GPS to indicate speed?

Setting up the sensor is a fairly simple and straightforward process. Once everything is hooked up, jump into the Runtastic Road or Mountain Bike app (unfortunately, the Speed & Cadence Sensor isn't compatible with the "basic" Runtastic app) and head into settings. From there, select "cadence sensor," and start spinning the bike's pedals so the magnets are passing their respective sensors (this is what takes it out of sleep mode). The app should find the sensor almost immediately and automatically connect to it. At that point you'll need to find the wheel circumference in millimeters, which can be done by finding a starting point and rolling the wheel one full rotation. I used the valve stem as the marker, then measured the distance after one rotation. On my 700c road bike, that came out to 2250mm.

Once everything is installed and running (which, honestly, probably shouldn't take much longer to do than the time it took to read the explanation above), everything else is pretty much automatic. When you're ready to ride, fire up the Runtastic Road or Mountain Bike app, start your session, and go with it. The sensor will automatically connect and feed cadence/speed information to the app. Throughout my time using the sensor I had approximately zero issues with it. Everything worked perfectly each time I rode (which is several times a week), so after the initial setup I never had to think about it again.

I also appreciate the fact that should I choose to move to a different app – like Strava, for example – the Speed & Cadence Sensor isn't rendered useless. As I mentioned earlier, it's essentially a rebranded Wahoo unit, so it works perfectly with other apps. 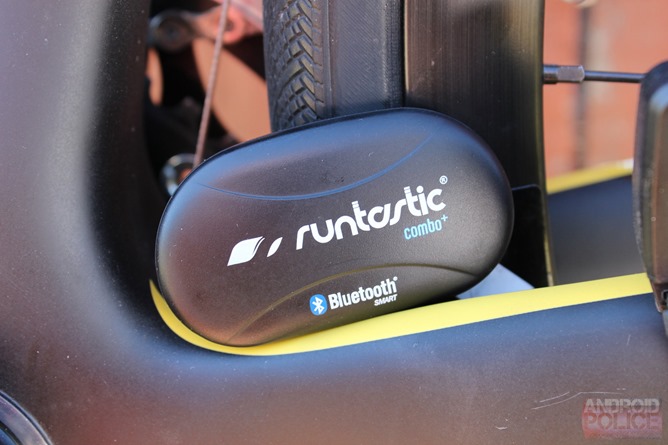 Compared to the Speed & Cadence Sensor, the Runtastic Heart Rate Monitor is much easier to set up. Also unlike the S & C Sensor, it's compatible with the basic Runtastic app (as well as the Road and Mountain Bike apps). Since it, too, is just a rebranded Wahoo sensor, it's also compatible with other apps, like Strava.

In short, this is pretty much a typical chest strap HRM. The strap wraps around the user's chest with the monitor directly in the center. It's moderately uncomfortable initially, but after a few minutes becomes basically unnoticeable.

Like the S & C Sensor, it connects quickly and easily. Make sure the monitor is placed on the strap and correctly lined up on your chest, jump into the Runtastic app of your choice, head into Settings, and select "heart rate" or "heart rate settings" (depending on the app). From there, you'll specify that you're looking for the Runtastic HRM and it should find it pretty quickly. Tap the RT-HRM option and you're done – it should automatically connect every time you start up Runtastic moving forward. 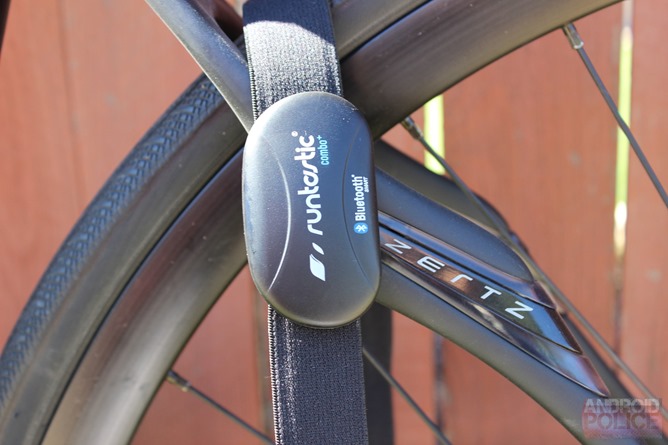 The biggest issue I've had with the HRM is remembering to put the thing on in the first place. More often than not, I either leave it in my backpack (when I commute with one) or on the counter at home. I'll generally remember it shortly after leaving to go ride, but at that point it's too late – I'm already gone.

If you can remember to put it on, however, it's an incredibly useful tool. Staying within your target heart rate zone is important if you want to maximize fat loss – somewhere between aerobic and anaerobic is generally recommended. Push too hard and you're not getting enough return for your investment; don't push hard enough and you're not going to get the results you want. It's a balance, and the HRM can help you stay where you need to be.

Runtastic also does a good job of keeping you in check with your heart rate, both on-screen and with audio cues. If running the "pro" version of the app, it can be set to send an audible notification when transitioning from one heart rate zone to another. While this can be incredibly useful, I found it to be equally as annoying since the notifications were seemingly non-stop. Your mileage may vary (hahahah), of course, but I ended up turning off this feature and just trying to keep an eye on it myself. 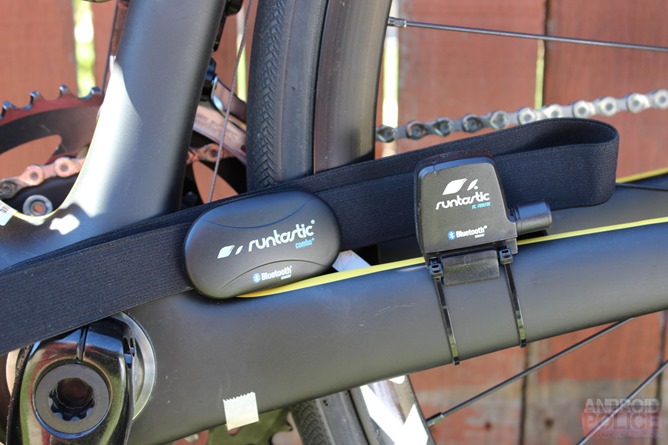 If you're into cycling, the Runtastic Speed & Cadence Sensor and Heart Rate Monitor are exceptionally useful tools to turn your phone into the best cyclometer it can possibly be. If you can't justify spending $400+ on a Garmin Edge, then you can get basically the same sort of feedback and features from your phone. Granted, it'll suck down your battery – but I guess that's the price to pay to save some money and not have to deal with one more gadget. You can find both units at the links below.