Shortly after the announcement of Android Wear, the engineers behind Glass acknowledged the two teams had been working closely to bring many of the best features of each product to the other. That collaboration is truly bearing fruit in the form of notification syncing on Glass. The experience is like having Chrome notifications appearing in the top-right corner of the desktop, but somehow more enjoyable. As a small treat, the disembodied cards don't just appear on the screen as they would on Wear, but the text and icons are animated into view from the edges after the main content is visible. 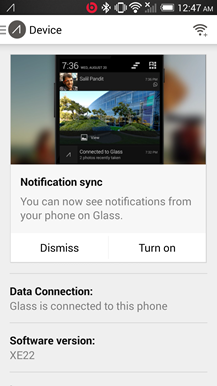 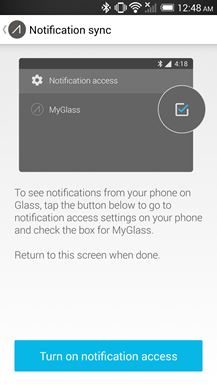 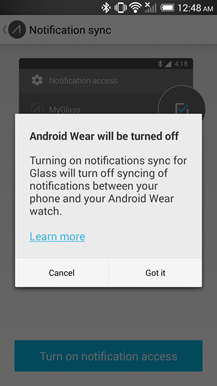 Setup is dead simple. It merely involves enabling the feature in the MyGlass app, and then granting it access to your notifications. There is a catch to using Glass as a mirror to your phone's notifications. You'll have to sacrifice the ability to get synced notifications on an actual Android Wear wristwatch. This makes some sense, because you probably don't want to see the same thing appearing on 3 different screens, but it might not be ideal for people that would like to regularly switch between the two platforms depending on how they use it. At least it's not too hard to trade back and forth, just a bit tedious.

It looks like the same options are available as would be on the watch, but presented in the same fashion Explorers are already accustomed to. The card shown below, for example, allows users to Share, Open on phone, or Dismiss. 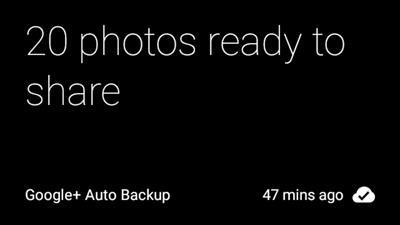 It's not particularly exciting to look at, but it is worth noting that there are about 50 new strings and a dozen or so activities and services that include the word "Wear" in their names. There's nothing to speculate about, but it seems like notification syncing is being treated as a feature belonging to Wear, and Glass is simply adopting it. It will be interesting to see if this trend continues or if this naming turns out to be irrelevant.

Notification syncing is a pretty awesome feature, but it's certainly not the only one that comes with the MyGlass update. While tearing down the apk, I came across a couple of unexpected additions. The first is an upcoming feature that will finally allow users to brighten up their all-to-familiar clock screen with a background of their choosing. The feature isn't live yet, but it looks like everything is ready to go for the app, and it's just Glass that needs an update. 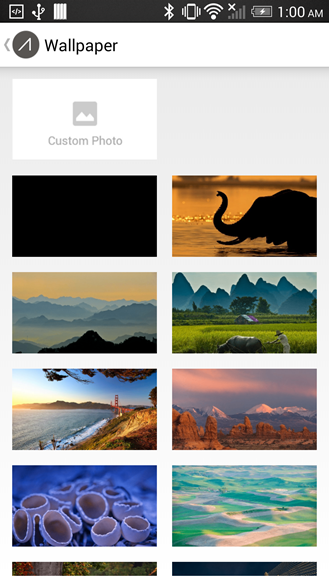 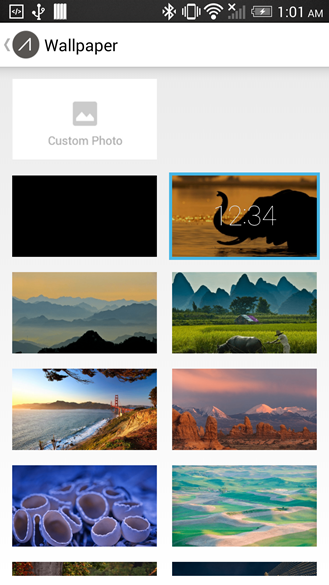 Notice the elephant image on the right side shows a clock.

Even though the feature isn't fully functional, it's possible to access the configuration screen with a simple command. Just connect your phone to a computer with the latest version of adb, open a terminal window, and enter this:

Right now, there are just a few common backgrounds and an option to use an image of your own. Attempting to set a wallpaper will result in an error, but the preview image will turn to show the numbers of a clock, demonstrating what the screen will look like on Glass. This will probably have some battery implications due to a brighter image – as if Glass didn't suffer from enough – but it will certainly make for a friendlier experience.

The final secret to unveil is one many Glass Explorers have been asking for since the beginning: keyboard input. Unfortunately, there's no screen to show and hardly any strings to look at, but it's plainly obvious what the feature is there for. Sometimes Glass just can't recognize a spoken word or an app requires a password that shouldn't be spoken out loud. Under these circumstances, it actually makes sense to abandon the idealistic input model of Glass and resort to the tried and true method of typing on a phone.

The strings are fairly telling, making up the few details we'd need to see to be sure of what this feature is meant to accomplish. However, it's the activity that gives away most of the important details, primarily that "windowSoftInputMode" is always visible. (That's referring to the on-screen keyboard.) We can also discern that the screen will be pointlessly locked in portrait mode, even though it's usually easier to type in landscape. One final interesting bit is that this view can be accessed even while the lockscreen is active, which is handy if you use any form of security to keep intruders from messing with your phone.

That's about it for the teardown. You can grab the update below, but remember that notification syncing won't work unless the paired Glass unit is running on at least XE22.

Unlocked HTC One M8 Developer Edition Gets KitKat 4.4.4 And Eye Experience In An OTA Update To ...