There's an update to Chrome Beta (v39) rolling out in the Play Store, and it brings at least one notable feature—Reader Mode. You can probably guess what it is from the name. It strips out all the superfluous stuff on a page, leaving you with just the content. If you want it without waiting, we've got a download for you. 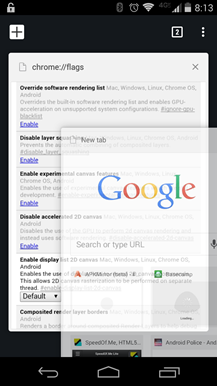 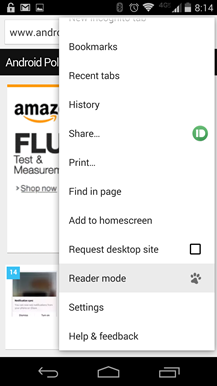 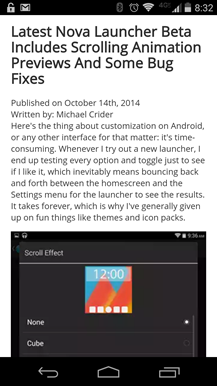 Google is notoriously vague with Chrome Beta changelogs, and this is no exception. "This release contains lots of bug fixes and performance improvements," doesn't really tell us what we want to know, Google. So far we've noticed two changes, the first being a slightly different animation when closing a tab. The swipe animation now pulls the tab down and to the side as it fades. Before it just went to the side.

The larger change is the addition of Reader Mode, which has popped up a few times in the past. Now it's an item in the menu on all pages to load up a version of the page that's just the text and in-line images. It has a little paw print next to it in the drop down, indicating this is still a dogfood feature. So, it's probably kind of broken. It seems to work well enough most of the time, though it sometimes crashes the browser or grabs the wrong content.

We'll update if we spot anything else.

Update: The new Chrome Beta also works in windowed mode on Android L preview. It's sort of like G+ and Newsstand. It's still unfinished, but a hint of things to come.

Update 2: Reader Mode can also be accessed via a toolbar button after you enable a flag in the about://flags screen. Just enter the following.

Then you get a handy button for toggling Reader Mode on and off. It should only appear when a page has content that can be rendered in Reader Mode. (Thanks, Rodrigo Sowza) 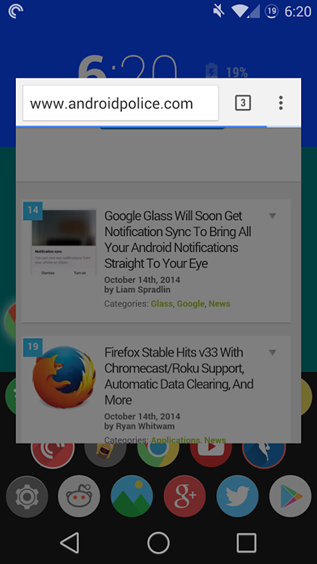 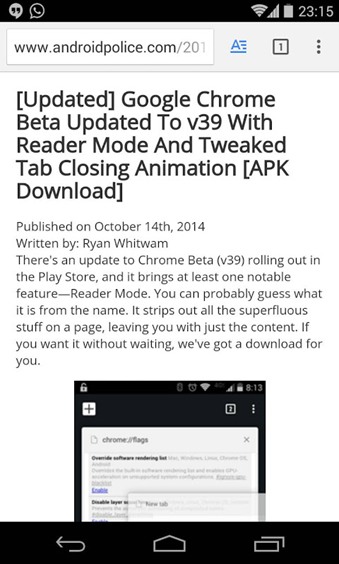 Google Glass Will Soon Get Notification Sync To Bring All Your Android Notifications Straight ...

Motorola's Nexus 6 Pops Up On AT&T Site With Possible $49.99 Price On Contract