In the Android Police teardown of the latest Google Play Services support app posted yesterday, Cody Toombs noted that the "Nearby Players" feature we've been spotting for a few weeks seems ready to go. And lo and behold, several users have seen the feature become active on their phones, heading to Google+ and our own tips box to spread the joy around. Check your own app to see if it's enabled, though the distribution seems somewhat random - we're seeing reports from players in Mexico and Italy at the moment. 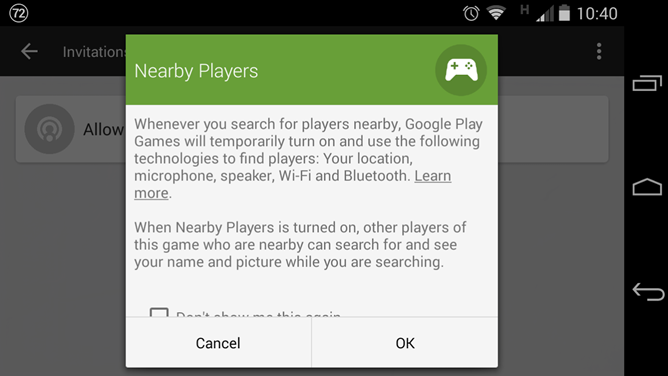 Nearby Players is exactly what it sounds like. The feature alerts you when someone near your location is playing the same game from the Play Store, either in the general Android population or limited to your Google+ circles. You can search for new multiplayer matches in compatible games either via the standard online matchmaking system or specifically for players who are physically nearby. Obviously this is a boon for those games that include local Wi-Fi or Bluetooth multiplayer (or even multiple players on a single device), but there's no reason that online-only multiplayer modes wouldn't work for players in close physical proximity as well. The feature can be disabled if you would rather stay private.

Nearby Players, as well as any other services that use the Nearby system, uses your device's GPS (presumably), Wi-Fi, Bluetooth, and even the microphone to determine your location. You'll need the latest version of Google Play Services, and probably a fully updated Google Play Games, to see the Nearby Players option, but you might not have it enabled even then.