So there's this South Korean seller on eBay who seems to have a large stock of Sandisk's Class 10 Micro SDHC cards and wants to get rid of them. For $10 a pop, you can get your hands on this very decent amount of extra storage for your phone, tablet, or other gadgets. green-sum (that's the name of the seller) will be nice enough to ship it to your "worldwide"  for what seems to be a $5 fee across several ZIP codes we tried (the seller did list with free shipping originally, but the amount has since gone up), as long as your definition of "worldwide" excludes Asia, Africa, Europe, Oceania, South America, and basically any territory that isn't the United States minus Alaska and Hawaii. Yeah, that's a pretty loose use of the word. 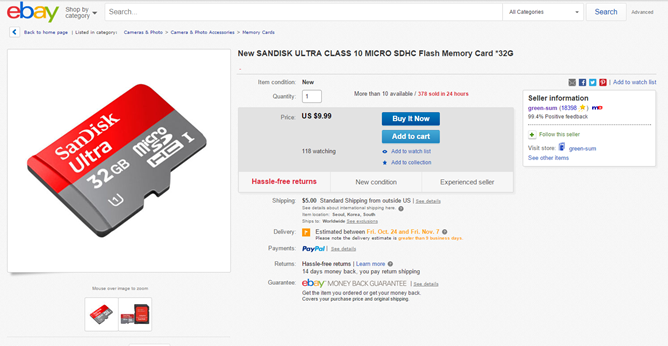 The same card goes for $30 on Amazon, so this is either an alarmingly fishy or really fantastic deal. You should keep in mind that fake and counterfeit MicroSD cards are quite abundant, and use your better judgement. On the plus side though, the seller isn't located in China, has an impressive 99.4% positive feedback rating, and seems as legit as you could possibly be on eBay. And then again, for $10, you aren't risking a lot.

Source Is A Beautiful News Reader App From Jacob Klinker, Now Out In Beta