Amazon's Coins program, which basically trades real money for digital currency that can only be used on the Amazon Appstore, has become surprisingly popular. That probably has a lot to do with the massive amount of Coins that Amazon has given away in various promotions, but it doesn't hurt that the company recently integrated the Appstore with the rest of Amazon. If you're digging Amazon's ecosystem, the retailer is offering discounts of up to 20% on Amazon Coins. 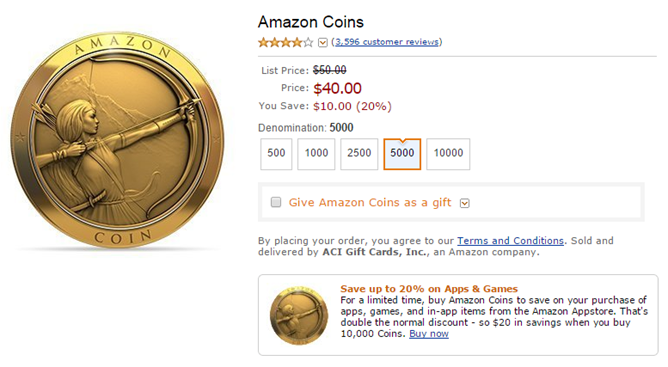 Naturally this promotion is most relevant to those who use a Kindle Fire tablet or Amazon's Fire Phone, since even a moderate app downloader will eventually spend up to $40. But anyone who regularly buys apps or in-app purchases from Amazon's system could probably justify the discount at the higher tiers. Remember: Amazon Coins can't be redeemed for physical goods or non-app digital stuff like Kindle books, and you can't trade them back into "real" currency. It looks like this promotion is US-only for the time being.

The HTC One M8 Eye Is Now Ready For Purchase, As Long As You Live In China