Whenever we post a story about a new app or game that has had a considerable delay in coming from iOS to Android, we get commenters asking us what took so long, or even saying that they won't download it because of the delay. We get it, and it's no less frustrating on our side. But despite Android's market share and sales dominance, developers continue to prioritize iOS. Various studies and statistical presentations say (with increasing repetition) that this is because people spend more money on the App Store than on the Play Store. It's hard to argue with the numbers.

Google is looking for ways to improve things for Android developers and the Play Store in general, according to the latest bit of anonymous info posted by The Information. Writer Amir Efrati quotes "a person involved in the discussions" when he claims that Google is testing new ways to engage users. Details are scarce, but the gist is that Google will give developers new tools for "micro apps," tiny bundles of code that include a small amount of functionality in a smaller download for a smaller price, or for free. The strategy is allegedly aimed at getting frugal users, including those in developing markets, to part with at least a little bit of money. Google's Android One initiative is all about hardware, and these micro apps would make a nice software counterpoint. 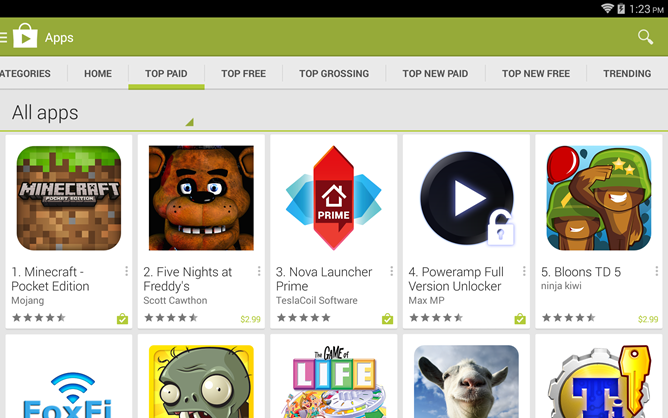 That said, it's hard to see where any real innovation would come in. Developers can already make tiny apps with tiny functions, and many independent devs pride themselves on making apps that take up less than a megabyte of storage with minimal hits to performance. The only thing that's missing is the price: presently developers can't offer apps or in-app purchases for less than a dollar on the Play Store. According to The Information the new approach centers on "app testing," but again, it's hard to see how this would be substantially different from a standard demo or trial app, and Google Play already offers a generous return window.

Efrati claims that this particular project has been going on for at least a year, and that it's part of a larger push within Google to increase the Play Store's revenue. One unverified figure stated that less than 10% of Play Store users paid for any apps or content at all as of last year. Even so, it's not clear when or if any significant changes will be made - even The Information's rather long report admitted that the technical side of this push isn't well-known at the moment.

Google's New Vision For Launcher Icons - Paper, Lighting, And How To Get Your Icon Ready