The first thing HTC announced at its Double Exposure event today wasn't new hardware. No, the company was very eager to share its new software, which it has coined the EYE Experience. This term encapsulates a full range of features all aimed at making your HTC phone a better tool for taking photos.

Let's run through the features. One addition is an Auto-Selfie (ignore the name and bear with me here) function that will automatically take a photo with the front-facing camera after users have framed the shot and held the phone still for two seconds. There's also the ability to use voice prompts, such as "Say Cheese" to take a photo or "Action" to record a video without having to reach for a button.

Perhaps more impressively, the company is rolling out the option to simultaneously take pictures and capture video through both the rear and front cameras. And of course, there are the more gimmicky things, such as the power to crop yourself out of a photo taken with the front shooter and insert your presence into scenery taken with the rear. 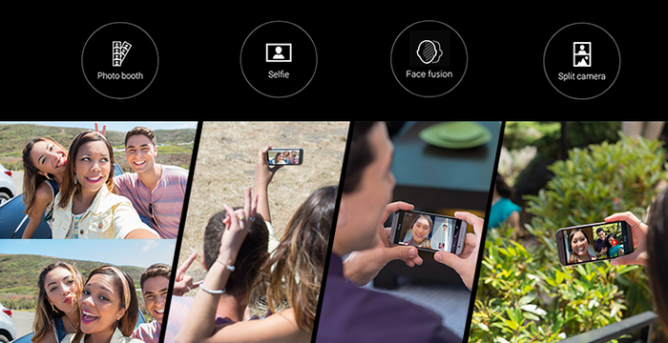 HTC isn't just focused on photos and video. It's using the Eye Experience to improve video chat as well. There's face tracking that will work to keep your face in the frame as you chat with others. It can manage up to four faces at once and place them into a grid layout for whomever you're talking to. Then there's screen sharing, which will let you push images to the other end of a chat without backing out of the conversation.

If this sounds like a lot to handle, HTC has produced a series of ads to drill the features in. Here they are.

The Eye Experience will ship with the newly unveiled Desire EYE, but it will also come to the full set of One devices through a future software update. The full list includes the HTC One (M7), HTC One (M8), HTC One (E8), HTC One mini, HTC One mini 2, HTC One Remix, HTC One Max, HTC Desire 612, and HTC Desire 816.

HTC Announces Its Mobile Sports Camera, the 'HTC RE,' With WiFi, Bluetooth, And A 16MP Sensor