The stable version of Chrome for Android has reached version 38, which came to the beta channel last month. Google hasn't posted a changelog just yet, but we can surmise what's going on from the last update of the beta. Update: Changelog below. This isn't going to be a radical departure for the app, but it might fix a bug or two that's been gnawing at you. 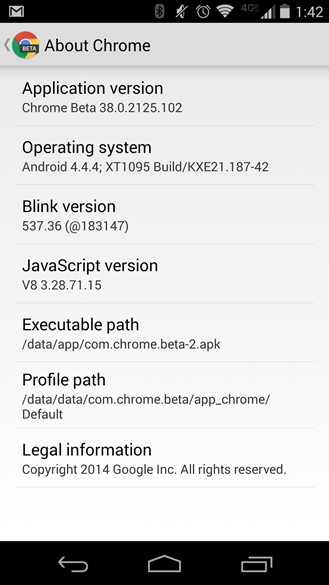 The initial v38 beta rollout included new battery and orientation APIs, some material design tweaks, and a variety of bug fixes. It also had the new touch to search functionality on L and via a flag on other versions. However, that doesn't appear to be working in the new stable build. Bummer. The Google changelog matches the one posted for the beta release, so no surprises there.

As usual, we've got the APK below for you to download. If you notice anything unusual, let us know.

Report: Google Is Working On 'Micro App' Trials To Boost Paid Downloads In The Play Store