For those who may not already be familiar with the Google Play Games real-time multiplayer feature, it handles many of the challenges related to setting up and maintaining games that support two or more players. The service simplifies tasks like setting up rooms and sending invites, and it can even set up connections between players over complicated networking environments. With today's update to the C++ SDK, developers will have an easier time setting up gaming sessions between their players, regardless of the platform the game is running on.

Several new features have also come to the Google Play Developer Console in the forms of additional statistics and critical alerts. If you've been dying to know more about how often your players are jumping into multi-player matches, the new Dev Console is now tracking those stats automatically. A new graph is available to show how many and what percentage of your players are engaging in games initiated over the Real-Time Multiplayer features. In the event that something has gone wrong with the implementation of real-time or turn-based multiplayer, or if a high number of duplicate images are detected in Achievements or Leaderboards, Google is now raising alerts to help identify these issues.

Quests are also getting some improvements. To begin with, the SDKs now include default toast messages for "quest accepted" and "quest completed" events, so developers aren't required to make up their own, unless they chose to. The Developer Console also got rid of a restriction that prevented 2 quests with the same name from appearing within 24 hours of each other. Finally, another graph is available to display the completion rate of quests, so it'll be possible for developers to make adjustments to the difficulty, if necessary.

Finally, a stylistic revamp was also in the cards as a Material Design makeover hits the Android, iOS, and C++ SDKs. Of course, many of the UI elements on Android have already moved to the new design language thanks to a recent Google Play services update, but this will bring any remaining graphics up to date if they were provided by the SDK. The update will be more dramatic for games on other platforms, but it will make the experience more consistent for players, regardless of the type of device they're playing on. 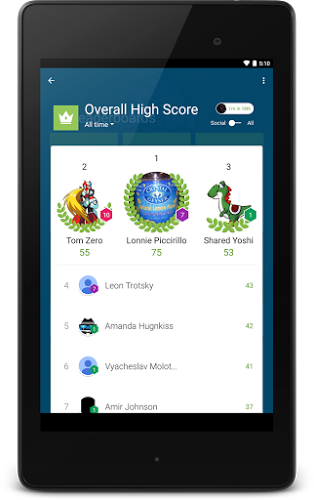