Enterchained looks like a standard 2D brawler, but it's got a trick up its sleeve. You control one arena fighter slashing through foes, the computer controls the other, and they're both tethered together in battle. You can more or less drag your AI companion around - I like to knock enemies off their feet, then move on to the next one while the computer delivers a brutal finisher. Enterchained is a Unity game, so don't expect a technical powerhouse, but it's fun as a hack-and-slash time waster.

Take down your foes with slashes, sword throws and chain trips to complete quests for gear and glory.

Want Clash of Clans without all the IAP? Then publisher Noodlecake has a game for you. Tower Dwellers uses the familiar tower defense + real-time strategy formula, but in a premium $4 package. Your towers are both defensive structures for your fantasy-themed troops and the spawn points they come from, so defense takes the front seat in gameplay. An overworld map will guide you through the campaign and there's a sandbox mode to boot, but unfortunately multiplayer is nowhere in sight.

Conquer through battle and reclaim the land you once called home. 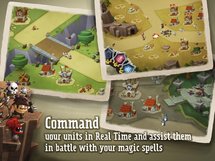 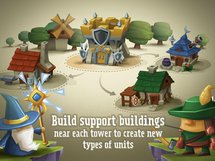 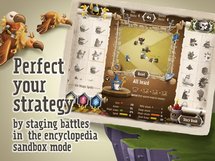 I'm going to level with you, cricket fans: I have no idea how your sport works. All I know about cricket is that my Indian friends lose sleep trying to watch home games at 3AM. But I understand that your storied and funny-looking pastime is underserved, so here, have a cricket simulator game. It looks really complicated and graphically intense, at least by mobile standards, which might help justify its nearly $10 price tag. Thankfully there are no in-app purchases.

Cricket Captain is back for the 2014 season, with a beautiful new interface, updated 3D graphics engine, and all the attention to detail that you expect from the series. Cricket Captain has been hailed as the best cricket management simulation ever created, and with one of the most exciting cricket seasons for a decade in prospect, it’s about time you took control. This one gets a mention if only for the unique visuals, which are admittedly lifted right out of the upcoming stop-motion animated movie. Other than that, The Boxtrolls: Slide 'N Seek is a pretty standard 2D endless runner, with multiple characters, simple controls, and powered-up gadgets that can extend a run. Make sure to disable the in-app purchases if you download this free game for your kids.

Help the Boxtrolls rescue their friends who have been captured by the devious Red Hats. Take up to three Boxtrolls from the safety of their underground cavern to the streets and rooftops of Cheesebridge. Run, slide and jump to collect as many cogs as you can. Sneak past the Red Hats and be careful not to cause too much noise. Make your way to the Red Hat factory to rescue the captured Boxtrolls and unlock new adventures. Be sure to check out our gaming coverage from last week:

At Long Last, Google Voice Should Be Able To Send And Receive MMS Messages On Most US And ...