As cool as Google Voice's free text message service is, it has always been a bit barebones. Big features like MMS have been missing for a lot of users, with some notable exceptions. Multimedia Message Service, usually used to simply attach a photo to a text message, is handled by completely different servers at most carriers, causing some problems with Google's forwarding system. It looks like Google has addressed these issues, at least for most people in the US and Canada, finally enabling the sending and receiving of MMS via Google Voice.

Google employee Alex Wiesen announced the new feature on his personal Google+ account. According to him, "nearly 100" carriers across the United States and Canada should now support MMS sent to and from Google Voice.

A few quick tests at Android Police headquarters show that the system is working... sort of. I can receive MMS messages and their content via the new Hangouts-Voice forwarding system, but in Google Voice on both the web and my device, the MMS message isn't displayed. Presumably that's what's supposed to happen if you've enabled the connection. Other tipsters tell us that those using the old Google Voice app are seeing a link to the photo on their end, but that the other party on a "normal" smartphone is seeing the full image in his or her SMS inbox. Outgoing messages from Hangouts to standard numbers may also appear as a link. Performance seems to be pretty slow as Google retrieves the photo from the carrier server - Hangouts on my phone crashed a couple of times before it would load up the image. 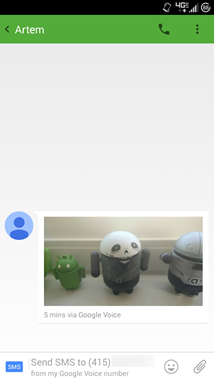 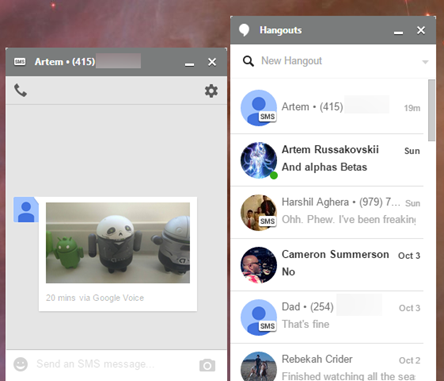 What about group MMS, you ask? In the comment on Wiesen's G+ post, Hangouts and Google Voice Product Manager Mayur Kamat said that group MMS photos will appear as separate incoming posts, so at least you won't be missing anything.

You'll notice a big omission in that shortlist of the biggest North American cell phone carriers. It looks like the famously strained relationship between Google and Verizon Wireless is still, um, complicated.

Worried About How Big The Nexus 6 Will Be? No Problem—Just Get This Giant Thumb Extension From ...