According to this account, the Desire Eye is a full flagship device with a single defining feature: a front-facing camera that's just as good as the one on the back. The Desire Eye allegedly uses a full 13-megapixel camera module on both sides of the device, complete with the same dual LED flash on the back and the front. Whether or not this is the "Duo" camera hinted at before isn't clear - HTC previously used that marketing term to refer to a double camera array (one "Ultrapixel," one standard, see our HTC One M8 review) on the back of the phone. The phone seems to have a dedicated shutter button on the left side, something that's fallen out of favor with every major manufacturer except Sony. I'd also point out that OPPO has a swiveling camera design on the N1 that accomplishes pretty much the same thing, albeit with just one camera.

Alleged specs include a Snapdragon 801 processor, 5.2" 1920x1080 screen, 2GB of RAM and 32GB of storage, and HTC Sense 6, giving the "Desire Eye" similar hardware to the One M8 flagship. Here's where things get odd: those specs also include a rather small 2400mAh battery that's removable, and a limited water resistance rating of IPX7. Both of those are notable departures from HTC's design language for the last couple of years. 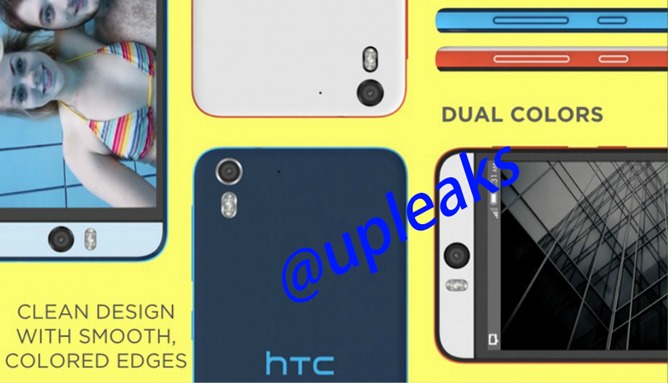 Frequent HTC source HTCFamily.ru has also posted another image from the Upleaks account, this one showing the back of the phone as well. The camera modules do look about the same. There's also a better image of the phone from the front, showing two color trims: red and blue. These phones look similar to the Desire 820, which debuted at IFA in Berlin last month.

Editor's note: these images appear to have been blown up and modified with a stock screen capture by HTCFamily.ru. That doesn't make them any more or less plausible. Note the shutter button on the right side.

There's a bit of overlap between these leaks and the ones in late September, so we don't know if we're looking at one phone or two. If the latter is the case, one would presumably use the colorful polycarbonate of the Desire line while another would be a One M8 variant with a metal build. The "ReCamera" action cam seems like a lock at this point. Since the event is being held in New York City, any phones unveiled there would probably be announced in partnership with at least one major American carrier.

As always, consider all rumors and gossip as just that until official word comes in from the manufacturer. HTC's press event will be held on October 8th.

HTC's Nexus 9 Appears To Have Passed Through The FCC

Verizon's RedBox Instant Is Dead, Jim, Less Than Two Years After Its Debut