We first got an indication that Google Now would begin to include election-based content in late September, thanks to the handy UnleashTheGoogle root tool. Now it looks like the "Election Information" cards are appearing for users based in the United States, where the midterm elections will be held next month. (For international readers: those are the ones that elect all the members of the House of Representatives, some members of the Senate, and various state and local offices, but not the President.) 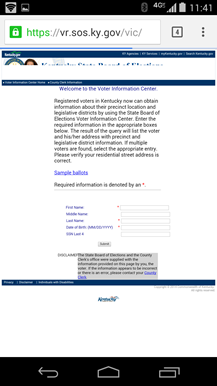 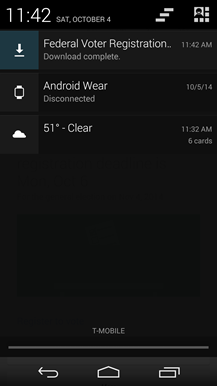 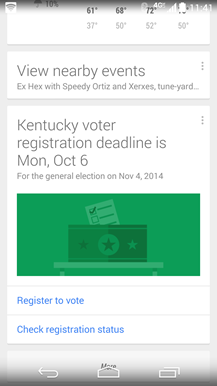 Like most of the content that appears on the Google Now page, you can activate the Election Information card just by searching for relevant pages via the Google Search application. So far, we're seeing voter registration deadlines in multiple states, but nothing else, though race and candidate information will probably show up as regular news if you frequent news and political sites. I would assume that results will appear on the card on the day of the election that you're interested in and those following.

Right now this feature is definitely limited to the United States, and considering Google's generally myopic view of other markets, I wouldn't count on an expansion any time soon. Again, you can probably "train" Google Now to display new information from your regular sites and similar portals after a little searching.

HP Introduces The 10 Plus Tablet With Full HD And Little Fanfare, Now Available For Purchase ...