If you need a great phone and aren't interested in a contract, but you're willing to compromise on what's technically the cutting edge, you're in a good position to save a bit of money. For example, take this perfectly good 32GB HTC One M7 (that's the one before the one they're selling now). If you're OK with a refurbished phone, you can pick up a white or black one from eBay for $249.99, well below the retail price. At the moment Amazon's selling the new version for almost $500. 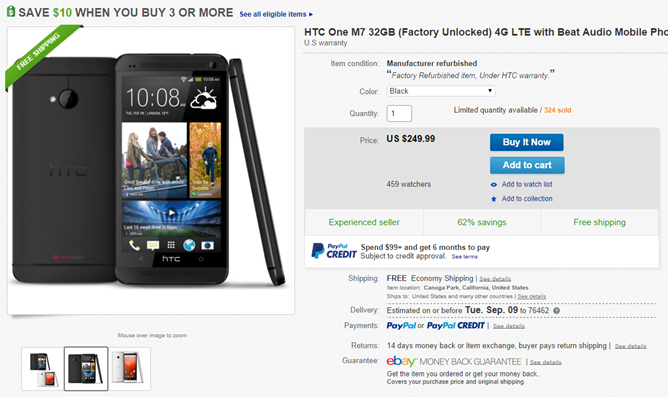 Two hundred and fifty bones will get you last year's flagship model, which is still a metal-clad, 1080p, quad-core 1.7GHz, 2GB of RAM beast running Android 4.4. This is the AT&T variant of the HTC One, but thanks to its SIM-unlocked condition (according to the reseller), it should play nice on most international 3G and LTE networks. (But not non-AT&T LTE bands in the States, of course.) According to the listing, the phone comes with an HTC warranty. The terms aren't posted, but most refurbished goods get a 90-day term.

The seller is shipping "worldwide," but that excludes Africa, Asia, the Middle East, Southeast Asia, South America, Mexico, and strangely, Cyprus, Greece, the Czech Republic, and Ukraine. So... I guess if you live in the US, Canada, Australia, or western Europe, you're good to go. Americans get free standard shipping, and those of us living outside California can skip the sales tax as well. If you want one of these phones, move fast: they've sold over 300 already, and there might not be that many left.