While LG isn't exactly a household name in the headphone business, the company's Tone line of Bluetooth headsets are extremely popular - like, 7,500+ reviews on Amazon popular. The company's newest model - the most premium it's released yet - is the Tone Infinim, model HBS900. With tuning by Harman Kardon, they get a bit of audio brand recognition, but I honestly would just say these are a good set of headphones altogether. 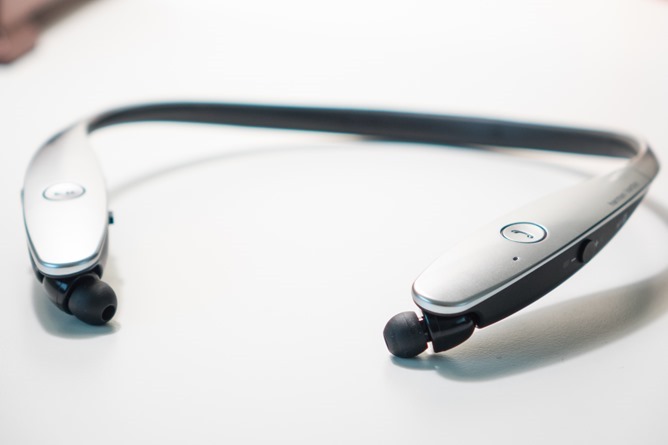 Still, they're $150, and that's pricey - are they worth it? Bluetooth headsets, to be honest, haven't come very far in the last few years in terms of functionality on Android. Google voice command integration is spotty (voice input works, hotwords do not), and that makes a lot of potential usefulness for the headset go right out the window for me. Otherwise, you're left using standard Bluetooth voice dialer controls that are built into Google... which are terrible. 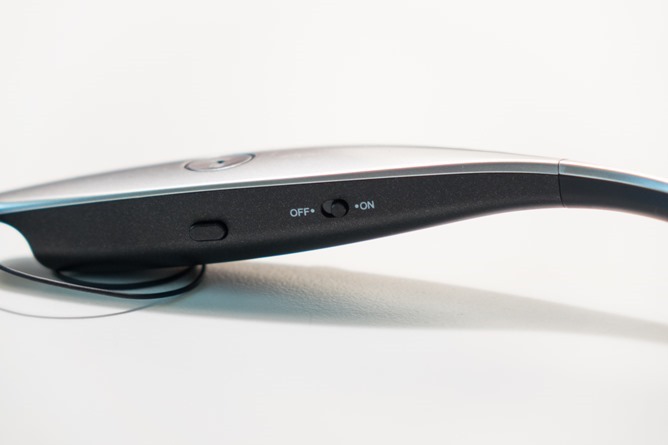 I found the controls for volume and track to be a bit annoying. The volume is slow to respond and makes an exceptionally aggravating level indicator beep every time you use it. To get the vibrate toggle, you long-hold in the volume up position. For battery, long-hold in volume down. Neither of these secondary functions works when you're on a call or listening to music / streaming audio, though - it just does volume. Same goes for the skip track buttons, by the way, which have secondary functions for last message received (it reads it to you) and the current time. 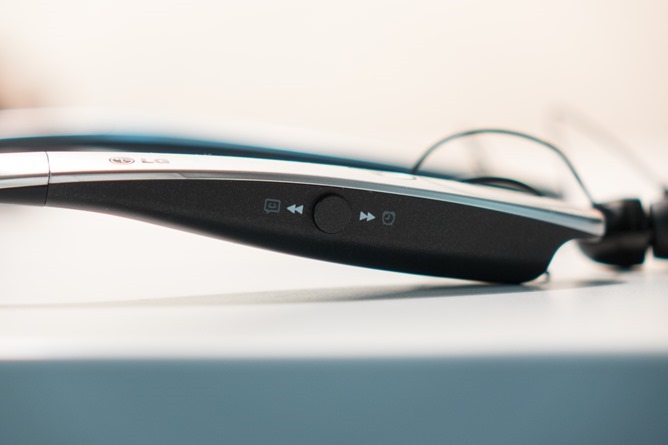 Honestly, the current time shortcut is pretty nice. If I was at the gym or out for a jog or something (not that I jog), being able to check the time without grabbing my phone and staring down at it would be pretty convenient. I'm not sure how often I'd use that feature, but it's a novel idea, for sure.

All the other functions are largely self-explanatory. Hold the call button to do a dial-back, tap it to voice dial, and you can set a hot-dial contact for a double-tap on the button with LG's Tone & Talk app (more on that in a second). Long-pressing the play/pause button, as far as I can tell, does not do anything, even though it does cause a beep in response. Double-tapping the play/pause button will switch EQ modes, though this feature is disabled if your handset supports apt-X Bluetooth audio transmission, apparently. Not exactly a big deal, in my book.

The LG Tone & Talk app didn't exactly wow me - there are a few basic features in here, but nothing very exciting. You can toggle which apps will read out notifications to you on the headset (support is reasonably broad - Hangouts is even in there, as are most popular text services), you can tweak how many vibrations you get based on notification type, how fast the headset talks, the default notification sound, the TTS engine you want, and a few other TTS-specific tweaks.

On the hardware side, the Tone Infinim is the first LG headset to use retractable earbuds as opposed to a free-hanging 'mount' system on the older Tone headsets. Pull out the earbuds, and the cable will lock at a fixed length to ensure you have just the right amount of slack without having so much that they flop around your neck or shoulders aimlessly. Simply press a button on the inside of the headset on either the left or right, and the corresponding bud will reel back into its slot. I will say the headphone wires attached to the earbuds seem very, very thin - I don't know how I feel about that in terms of durability. But the pull and retract mechanism is very effective and reliable, something that might be harder to achieve with a thicker cable.

Having an individual retract for each side means only one earbud has to be extended at a given time, useful if you plan on wearing the headset in the car or other environment where you need at least one ear unobstructed for legal or safety reasons.

Comfort wise, I found the buds stayed in place very easily (likely owed to the ultra-light cables) and the actual body of the headset wasn't burdensome at all - I hardly noticed it. I do think using sliders instead of buttons for things like volume control is a tradeoff, though, I legitimately do not like using them. Maybe over time I'd adapt, though. Battery life is estimated at around 17 hours talk time and 14 hours of music, with up to 23 days on standby. I have no reason to doubt those figures.

Leaving myself a voicemail with the microphone, though, this thing is a bit of a travesty. The on-device microphone on my S5 sounded twice as good, and when doing local recordings using an app, the difference is absolutely painful. Considering one of the main reasons you'd likely buy such a highly-functional Bluetooth headset like this is voice calls, this is a fairly sad state of affairs. The first recording is the LG headset, the second is the GS5.

So, is the sound of the headphones enough to make up for it? I'd say that if you were to buy a wired set of earbuds, something sounding like the Infinims would probably set you back between $60-100. At $150, I'd say that the LGs are priced reasonably for what they are - a functional, good set of Bluetooth earbuds with strong audio quality and some handy hardware controls. Even if they do make you look kind of weird. If your main concern is call quality or using them as a voice command headset, I'd suggest passing them by - this microphone is just not good.

They're available now, and your best bet for finding them is probably your local AT&T store if you're in the US. Elsewhere, I'm honestly not sure. 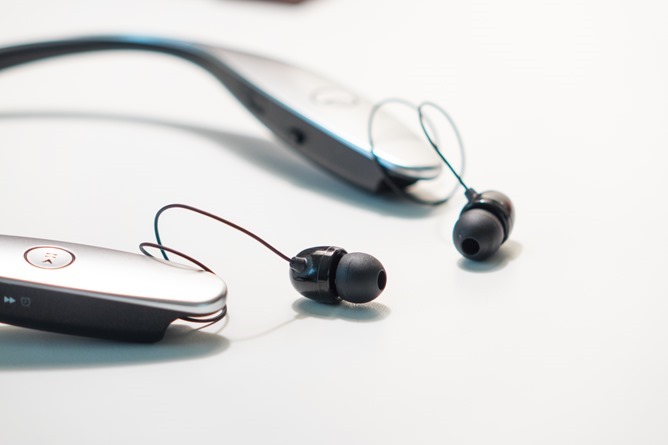