If you practically live out of your car like I do, there are probably cables loosely hanging from just about every outlet, and at least a couple awkwardly laying across the passenger seat. Even if you're not sporting a ride with a Bluetooth-enabled stereo, you can get rid of at least one cable by adding your own car kit to the mix. You could already get the GOgroove SMARTmini AUX Bluetooth Audio Receiver Car Kit for just $24.99 from Amazon, but now you can also knock another $5 off with a coupon code at checkout. 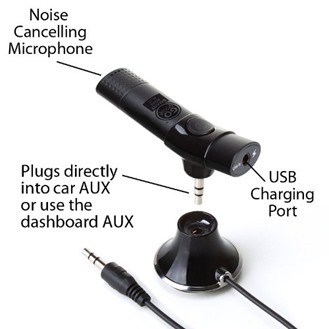 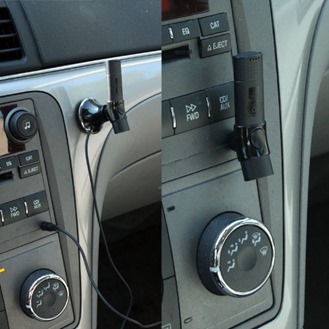 The SMARTmini receiver is a simple dongle that can be plugged directly into the AUX port on your dashboard, or into an included base for mounting just about anywhere. Setup only requires pairing your phone with the receiver, and then streaming music and hands-free calling are handled seamlessly. It also supports voice commands through Google Now (or that other voice assistant), so you'll be able to initiate calls, start navigation, or just about anything else. One hour of charging will give you 6 hours of music listening, or you can keep the charging cable attached while you're driving.

Reviews have been mostly positive, particularly regarding music and call quality. A few people have pointed out that there is only a single button for operation, so you won't have Next/Prev controls without reaching for the phone. Some have also complained that to issue voice commands, you'll have to hold down the button on the SMARTmini for 2 seconds to activate listening mode. Whether or not these are going to be problems will depend on what you normally do in the car.

If you're interested in setting up Bluetooth streaming and voice controls in your car, and you don't want to spend a lot of money to do it, this is a pretty great option. $20 is a pretty tough price to beat. Just hit the link below to head over to Amazon and enter the code SAVE5AUX as you're checking out.

Samsung Says The Sprint Galaxy S5 Should Be Getting Its Android 4.4.4 OTA (G900PVPU1ANI4) Now

Your Next Honda Infotainment System May Be Powered By NVIDIA Tegra, But It's No Android Auto