Sometimes watching American cell phone carriers is like observing a line of monkeys - see the whole JUMP/EDGE/NEXT/whatever Sprint calls their interest-free phone financing saga. Now it's come again, this time after AT&T announced a limited promotion that doubled the data on some of its shared family plans. Verizon has matched their prices with a MORE Everything promotion that starts tomorrow, October 2nd. For the same $130 price that AT&T is offering, pre-fees, Verizon is giving family plan users 30GB of data. 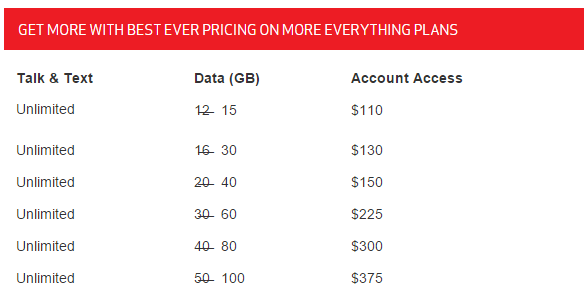 Sprint is jumping into the fray with an even better deal, which might just tempt people onto their smaller network. The Sprint Family Share Pack is getting promotional pricing from now until the end of October, allowing 2-10 lines to share up to 60GB of data at the $130 tier. There are only two higher tiers, 80GB/$150 and 120GB/$225. That's double the promotional packages of both AT&T and Verizon. Sprint is also waiving those pesky per-line access fees "through 2015" for customers coming from another carrier, making the Sprint packages cheaper than their red and blue counterparts despite doubling the data allowances.

Existing customers on Sprint can call customer service before October 31st to activate the extra data allotment. Verizon's press info doesn't say whether current customers are eligible for the upgrade; we've reached out to Verizon for comment. Remember that if you really want an ungodly amount of data, both Sprint and T-Mobile offer "real" unlimited single line plans at $60 and $80, respectively.

Update: A Verizon representative told Android Police that existing MORE Everything customers will be able to manually upgrade to the higher plan tiers free of charge starting tomorrow. Go to this link and log in to see your account details.