We've hit that point in the life of every Humble Bundle where a new set of games jump in to flesh out the original selection. This time around, we're seeing the likes of Epoch, Mikey Hooks, and Zombie Gunship join the seven games that made up the initial batch. People who paid over the average at the time of purchase will get these new titles automatically, and those who do so going forward will get them just as well. 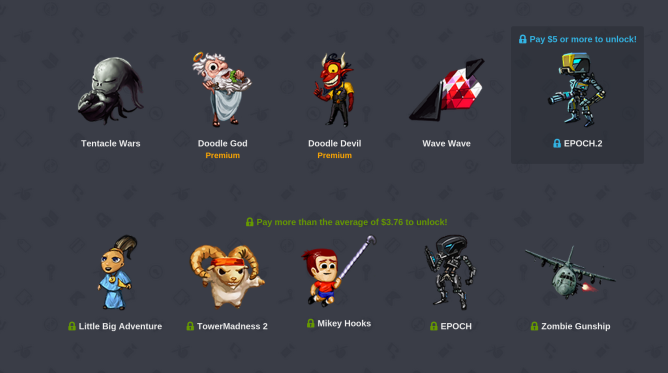 Humble Mobile Bundle 8 first contained Doodle God, Doodle Devil, Epoch 2, Little Big Adventure, Tentacle Wars, Tower Madness 2, and Wave Wave. It's easy to see where Epoch fits on this list, as it provides background for the sequel received by people who paid over $5. Mikey Hooks is a 2D platformer where players use a hook to navigate through levels as Spider-Man would. Zombie Gunship is a game about shooting zombies... from an AC-130 gunship.

The full set would normally cost upwards of $20, a significantly higher number than what most people paid for this bundle. It's also a lot more than you won't pay if you win one of the ten codes that we have to give away!

We've got 10 codes that grant access to the full bundle of games. If you want to enter the drawing for a code, just leave a comment below. We'll choose 10 random winners tomorrow (October 2nd). Good luck!

[Update: Another Photo] This Guy Seems To Be Using Motorola's Nexus 6 While Commuting