As part of the new rules that will require developers of paid apps to disclose an address, Google is also adding price ranges for in-app purchases to the Play Store. The change was set to go into effect today, according to Google, and sure enough the Play Store client on phones and tablets is showing the cost of in-app purchases in apps. However, it's literally only the price range. There's no data on what the individual purchases consist of. 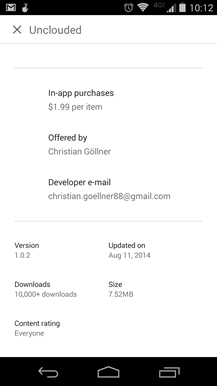 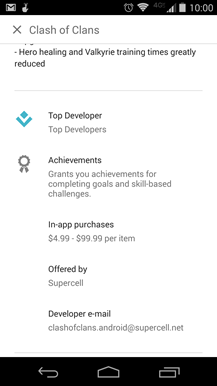 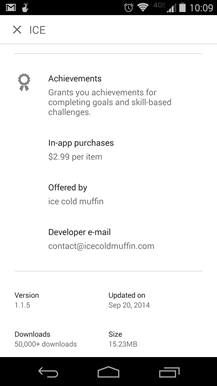 The new bit of data can be found in the expanded information section of the listing right next to the developer info. It simply shows the price range of all IAPs. For Clash of Clans, that's $4.99-99.99 per item. In the case of apps that simply offer a full version upgrade via in-app purchase, you just see the single item cost—for example, Unclouded costs $1.99 per item.

The obvious problem here is that you don't know what each "item" is. There are plenty of games that offer in-app purchases across a range of prices, but you have little to no way of evaluating them based on just the prices. For instance, a game that offers IAPs for hints is much different than one that sells you bags of crystals to be spent on in-game items. There's also zero indication when you're buying a full version upgrade compared to a consumable. You can surmise this based on the type of app and whether it shows a single-point price range, but it's still confusing.

We're seeing this change rolling out to the Play Store on devices right now, but nothing has happened on the desktop as of yet. Presumably that will happen in time. This is a nice first step, but a list of popular IAP content a la iTunes is what Google needs to be shooting for. If anything, listing ranges like this will scare users away from apps that offer IAPs—seeing it laid out as a range with no context makes the expense more real. Some people might not download a game knowing it will try to get them to drop $100.

Update: The price ranges have started showing up on the web now as well.

[Update: Live On Web Too] Google Has Started Listing Developer Addresses Publicly In The Play ...