Android Wear is Google's first attempt at a smartwatch (or other wearable) OS, and as such, the company is keeping a very tight grip on the user experience and list of hardware partners for the time being. An IndieGoGo project called Com1 didn't get the memo, though, and decided "hey, if we raise enough money, they have to let us use Wear, right?" Wrong, it would seem.

Com1 used stock images of Android Wear and the Android Wear trademark in its campaign page, which was taken down by IGG under the premise of an intellectual property infringement complaint by Google shortly after the campaign launched. Now, it's possible that Google simply was filing on copyright grounds for the stock Wear images being used in a commercial context without permission. That would be pretty standard fare for a tech company's business affairs department, especially when the content copied depicts applications (thus, products) Google has not open sourced as part of an operating system Google is tightly controlling in regard to both distribution and modification. It could simply be as innocuous as that: they didn't ask to use them, they got slapped with a notice. 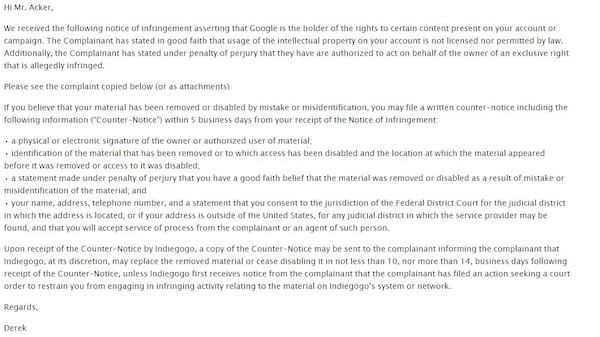 The alternatives, though, are much more compelling, I'd say. Google isn't regularly in the practice of strictly enforcing unauthorized usage of its intellectual property when it comes to imagery on the web. In fact, this seems quite out of character, in a way - even Android's trademark bugdroid is free and clear to use under a creative commons license, and Google is fairly lenient about the Android name itself in most situations (note that Google has also never taken down a crowdfunded campaign because it was offering devices with the Play Store without permission). So, why go after some small-time, $75,000 IndieGoGo project? It's not like this thing would have ever reached fruition, in all likelihood, because $75,000 (or $1.5 million) does not a from-scratch smartwatch make. It's not worthy of attention in and of itself on IP grounds - unless there's an ulterior motive at play.

It seems more likely to me that this takedown is sending a strong message to crowdfunders: Android Wear is not for sale, and no, we aren't going to let you start promising it to people without our explicit permission and cooperation (which, for crowdfunders, means likely never). Given that we already know Google is tightly controlling almost every aspect of the Wear UX - from UI to OTA updates - clamping down on crowdfunders looking to cash in on the Wear name only makes sense. It seems extremely likely at this point that Google is very carefully vetting its smartwatch partners, as Android Wear is not even fully published in AOSP at this point (Google claims it will be when "L" finally drops officially).

Still, even when Wear does make it to AOSP in its complete form, the software is basically useless for anyone actually trying to build a smartwatch from the ground up without Google's explicit partnership. The Android Wear app for Android, upon which Wear is critically dependent, will likely never be open sourced, and Google will almost certainly deny compatibility, and thus access to Google services, to any Wear device it has not vetted and deemed fit for sale.

Com1 wasn't a particularly interesting watch, it allegedly would be a very affordable Wear device with looks to match (ie, ugly), but Com1 isn't really the story here. By shooting down an Android Wear campaign quickly and decisively, Google is putting IndieGoGo and Kickstarter (and all their various ilk) on notice, literally and figuratively, that it's going to be vigorously protecting the Wear brand from unauthorized use. In short, don't expect any crowdfunded Android Wear hardware any time soon, if ever.