It's basically my job to type, so I type a lot. There's quite a bit more to it than that, of course, but typing is kind of the cornerstone of being a writer of any kind. Because of the amount of typing I do, a good keyboard is important. Not just a good keyboard for my desktop and laptop, but when I'm going to be doing some work on my tablet, I need something I can trust there, too. I've tried several mobile-friendly keyboards, and the current king of the hill is the Logitech K810 Bluetooth keyboard. It's a little beast of a keyboard, has backlighting, and is super comfortable to use for extended periods of time. Ergo, when Logitech announced its newest multi-device compatible keyboard, the K480, I knew I had to give it a shot. It's quite a bit different than the K810 - it's thicker, lacks backlighting, and uses AAA batteries instead of charging over USB. But it's also half the cost. At $50, this is one of the most affordable Bluetooth keyboards I've looked at in any serious capacity, which generally sets off a red flag right out of the gate. This go, however, I think Logitech did a great job of offering a good medium between functionality and cost. 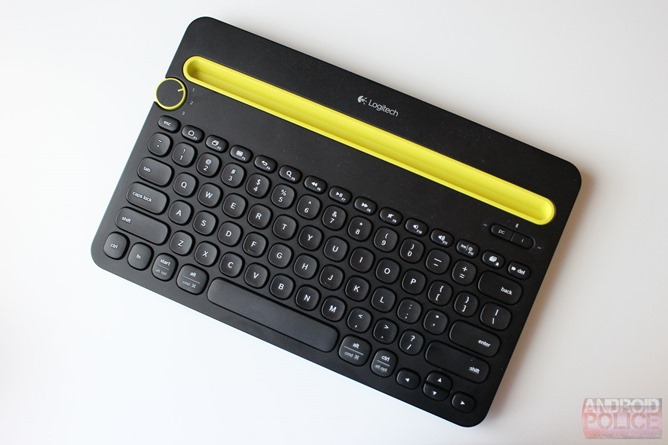 First off, let's talk about the intended use case for the K480. While it's technically portable, I don't really think it's meant for portability - it's just too thick for that. This is more of a "desktop" keyboard that can do a lot more than just work at the desktop. It has a groove in the top, which is meant for holding mobile devices like smartphones and tablets. This groove is the reason the keyboard is so thick - it just wouldn't work correctly if the unit were thinner, as the tablet/phone wouldn't be very stable when "docked" into the keyboard. As it stands, I was able to tap away on every device I used the K480 with without any sort of stability issues, which was nice.

Here's the scenario Logitech has in mind for the K480:

It's for the person who has multiple devices that they switch between several times a day. The only issue I see with that approach is that mobile devices, be it a smartphone or tablet, are inherently meant to be alongside a PC in most cases. Everything done in the video from one device or another can also easily be done from a PC. Need to send a text message? Use Mighty Text. Editing your calendar? Google Calendar does the job. But it's all about what you like, I guess. And if you like using all of your devices all day long, then more power to you. This keyboard might be for you.

As I mentioned earlier, the K480 isn't backlit, which is unfortunate. Backlighting is basically a requisite for any keyboard I buy these days, so I would really like to have seen it here, even if that means jacking the price up a bit. Fifty dollars is a nice price, but backlighting is nicer, at least in my opinion.

Then there are the keys themselves. They don't have that super premium feel that I've come to associate with Logitech keyboards, but they're not awful either. A little noisy and slightly mushy, sure, but they have a good amount of travel and are easy to type on. Again, we're talking about a $50 keyboard here, and in this price range the keys feel better than I expected. I've basically gotten accustomed to not even considering a keyboard that's less than $100 because they always feel terrible. So in that regard, this is a nice step up.

Like the keys, the build quality is just OK. It's not great, and doesn't have a premium feel. That's OK, because this isn't a premium product - it's a budget product. When judged as such, the build is pretty good, where that means "I don't feel like I'm going to break it with daily use." 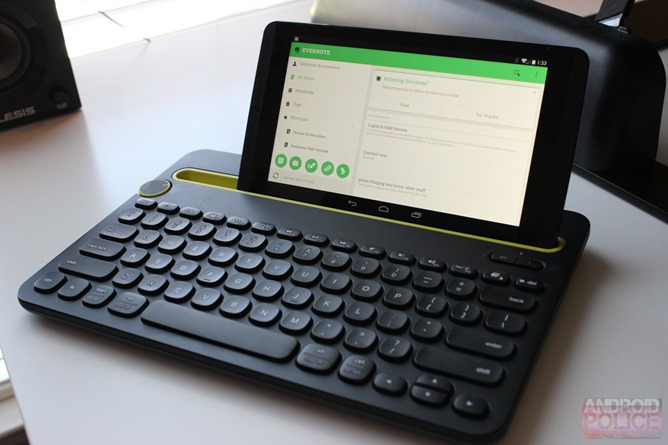 Overall functionality couldn't be more straightforward. It's a Bluetooth keyboard, and a little turn of the dial changes devices. Pairing is easy and intuitive, and everything else just gets out of the way. There really isn't a lot more to say about that – it just works.

If you haven't already gotten the idea, the K480 is basically OK. It's not awful, but it's not great. It's a solid budget keyboard, and a stellar option for anyone who wants a keyboard that will work on essentially everything they own (and doesn't want to go broke making it happen). If you're looking for higher-end features, then you should probably turn to a higher-end keyboard, like the K810. If you want full functionality on multiple devices without going broke, then this is your answer.