When a company's pitch to you is that their smartphone accessory was developed in cooperation with Raytheon, you're likely to listen. When that company then tells you they've built the world's first truly affordable thermal (infrared) camera and that it also attaches directly to your smartphone, you listen closely.

No, this isn't a gimmick, a trick, or some kind of workaround using widely-available technology to emulate thermal imaging. Seek Thermal is a real thermal imaging device that you can attach to your smartphone's microUSB port (Galaxy S4, S5, and Moto X / Moto G currently supported officially) and feed live video from the IR camera to the display.

One of the big problems with entry-level thermal imaging products has generally been, over the years, resolution. A handheld thermal imaging system with 80x60 (yes, 80 pixels by 60 pixels) resolution from a reputable manufacturer like FLIR will set you back $1000. Seek Thermal's sensor has a resolution of 206x156, but costs only a fifth as much. (A FLIR with even 160x120 resolution costs around $2500, by the way.) Like most IR cameras, the Seek's field of view is also extremely narrow, at just 36 degrees.

Now, it's true that these very expensive professional-grade systems do have some advantages over the Seek. More temperature accuracy at extremes (the Seek isn't particularly accurate for temperatures over 90 Celsius, but it is sensitive from -40C to 330C, and Seek claims they're working on this), built-in visible-light cameras, extreme ruggedness, and bundled software suites designed to analyze images taken from the devices.

Seek, though, doesn't really need a resume of its own as long as it works like it says on the box, and so far, I'm totally convinced. Now, there are some caveats - still images captured from Seek look like butt, especially if they're of a relatively complex scene. 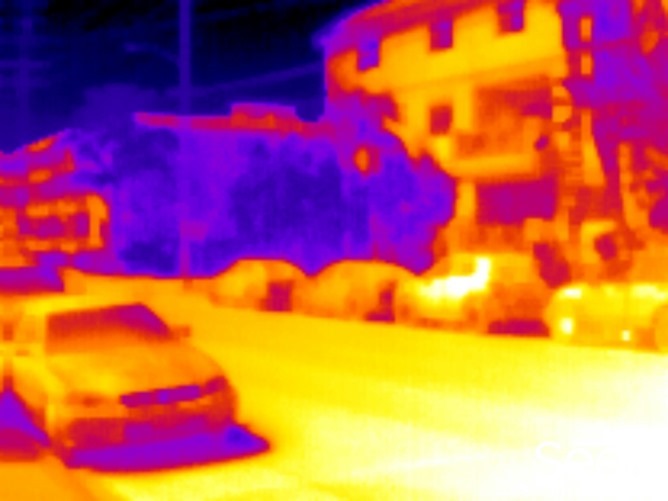 The reason they look so buttlike is because Seek is the real thing: 206x156 images upscaled to 400% of their original size aren't going to look nice. Here's that same image in its native resolution. 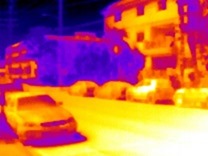 At this scale, the level of detail is far more respectable. So, please, when viewing the examples, keep this in mind: the cost of thermal imaging tends to scale with the size of the sensor pretty quickly, and as thermal sensors go, the Seek's is already pretty damn big for anything outside of industrial or law-enforcement contexts. And regardless, even blown up you can still tell what the picture is of, and that alone is pretty impressive.

You can also take video - something many handheld thermal imagers simply are not capable of (high-end IR rangefinders or camcorders can). Here's an example.

I figure a second video can't hurt, so here's one of my car's engine warming up. To walk you through it, in the first 15 or so seconds you're on the right side of the bay (facing the engine) and heat from the exhaust manifold is actually reflecting onto the edge of the engine bay (one cool thing you learn about heat while using IR is that it reflects off many surfaces, even your body heat is faintly visible as a reflection in a mirror).

We then move to the left of the bay, and you can see the manifold heating up very quickly. As the manifold gets hotter, you can see the exterior of the head of the engine also warming up above the manifold, as well as the interior of the engine bay. Zooming out, the plastic cover over the ignition distributor is warming faster than the rest of the area (because it's just thin plastic). You can see the heat from the radiator... radiating across the front of the bay while the exhaust manifold gets hotter and hotter. I then move over to a coolant hose going into the top of the radiator, and back over to the exhaust manifold and down through the front of the bay. Going back over to the right side, you can see that hose going into the radiator getting very warm while the air intake hose next to it remains cool, and then a shot of the radiator itself already heating up behind the auxiliary fans. This is all happening in real time.

Professional race teams and auto manufacturers already make use of thermal imaging, though on a much more advanced and scientific level, to see how engine and other components heat up during stress testing. Mechanics could make use of this technology, too, though, and they wouldn't need that kind of precision. If, for example, you were looking for a radiator stoppage, you might be able to see it just by observing where and how quickly the heat distributes in the radiator when an engine is started cold. Exhaust leaks could be spotted more quickly.

The one issue I take with video on the Seek is that because of the lack of a secondary video sensor (or the ability to underlay video from the phone camera in the thermal image), the frame rate is pretty abysmal. Many modern thermal cameras get around the slow refresh rate of thermal sensors by combining a video feed of visible light from a second camera underneath the thermal imagery. The thermal images still refresh slowly, but it gives things a slightly more "real" look, I'd say. Still, this is a minor complaint when you consider just how far down Seek is bringing the price of thermal imaging.

Uses for technology like Seek are plentiful regardless. Analyzing your home's wall insulation, looking for window leaks, drain stoppages, hot water pipes, or windows letting air in. You could use it for cooking, to examine how evenly distributed heat on your grill or frying pan is, and because Seek is precise to within a fraction of degree, you can even take the temperature of those surfaces after selecting the appropriate emissivity option (skin, paint, wood, granite, stainless steel, etc.). It will even tell you what the warmest spot on the viewfinder is versus the coolest (this mode unfortunately seems broken at the moment on my device, constantly telling me the hot spot is 164-165F).

At night, Seek's usefulness becomes largely self-explanatory - people, animals, cars, anything generating heat, becomes very easily visible against the darker, cooler background of the evening. Also, insert Predator jokes here. And no, you can't see through walls, sorry, but neither can any infrared camera. 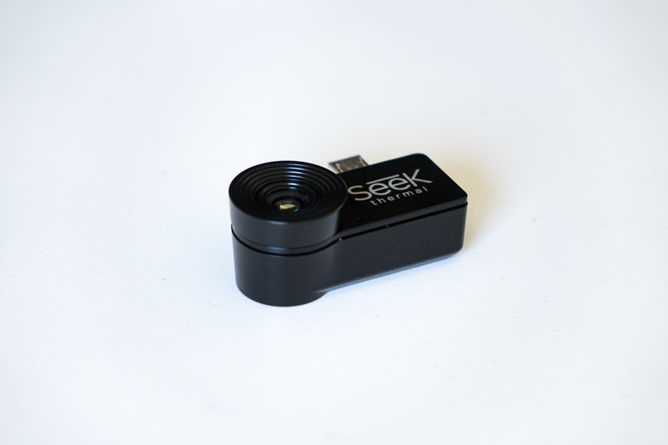 As far the physical device goes, Seek does have some drawbacks. The Android version of the dongle has a non-reversible microUSB connector, even though not all Android phones have their microUSB ports oriented the same way. This makes Seek basically useless for phones or tablets with microUSB ports oriented in such a way that seek would face the same direction as the display. I'm hoping a model with a reversed or reversible connector is being planned (update: Seek will ship a reversed microUSB OTG adapter if you ask for it, but this is kind of a lame solution if you ask me), though the current setup is the most common among Android (read: Samsung, LG, Moto and others) phones today. 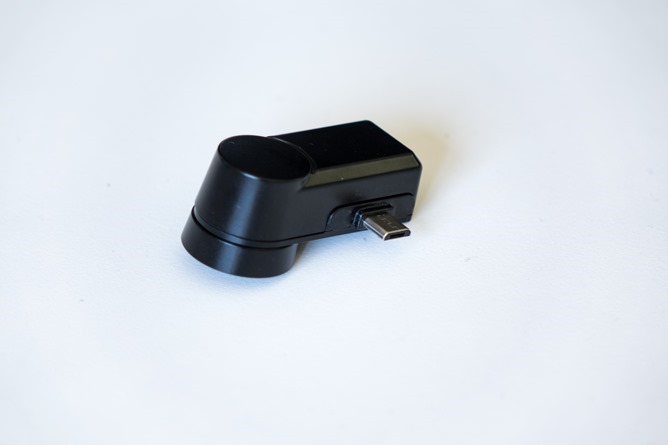 But Seek does have the advantage of not mattering exactly where on your phone or tablet the microUSB port is, since it's just a dongle about the size of two small, stacked USB drives, at 1.75"x0.75"x0.75" (height at thickest point). The device itself seems very durable, and is housed in a magnesium alloy casing, keeping it very light.

With my Galaxy S5, the Seek simply just worked. I plugged it in, started the Seek app, and away I went - no calibration, instructions, or other steps required. That's very cool. Because it's powered by and communicates over USB, there's no pairing to deal with, your smartphone just needs USB OTG capabilities. Seek has tested on the Galaxy S4, S5, and last year's Moto G and X. I tried it on my AT&T G3 and it functioned just fine, but I'm sure support will vary by handset. 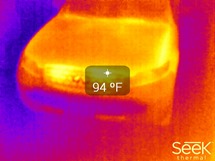 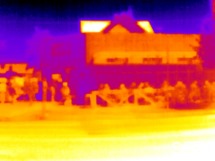 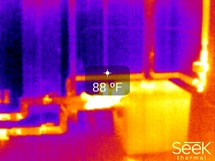 Left to right: a car that was recently driven, people at a restaurant, a water heater pump.

The app goes beyond the basics, too. You can set it to actually show a temperature for the object at the center of the camera's view, high and low temperatures currently in view, and even change the color overlay scheme from the default to a wide selection of alternatives. The Thermal+ mode runs your device's camera and the Seek at the same time, and you can swipe a slider bar across the screen to show more or less of what each sees. I didn't find it especially useful, given that it's not set up such that the camera and the Seek are framing the scene similarly. This is especially apparent because of the Seek's extremely narrow 36-degree field of view, which is a fraction of a modern smartphone camera's. 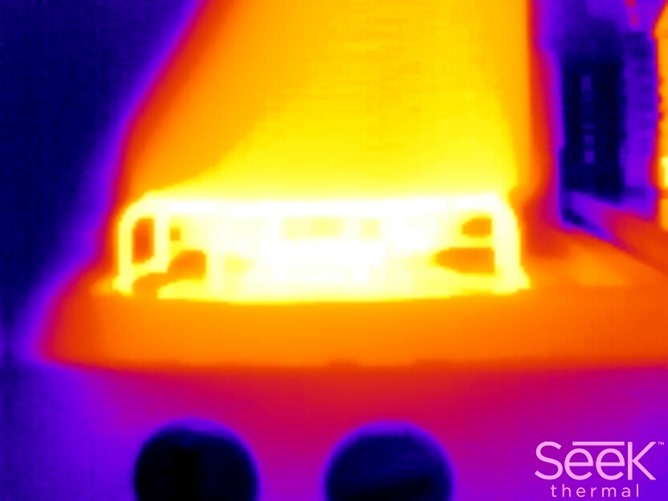 Alright, so you're intrigued, aren't you? Is there some big catch here? As far as I can tell, there really isn't: Seek is legitimately kind of sort of incredible. Other companies are working on smartphone thermal solutions, but none seem as affordable or near reality as Seek. Seek's big claim to fame is that they're the first company to publicly partner with Raytheon and Freescale on a new technology the companies have pioneered that allows the production of microbolometers (the sensors used in IR cameras) with much greater pixel density at a much lower cost. Seek says they're also utilizing a proprietary manufacturing process that greatly reduces the amount of time (and thus money) it takes to make each device.

Orders for Seek start today (microUSB and Lightning connector versions), right here, and I have to think Seek is going to have trouble keeping up with demand from both consumers and small businesses for these things.