The Humble people are on a roll. In addition to the Humble Bundle for PC and Android 11 announced just yesterday, they've launched a new Android-only bundle for cash-strapped gamers to enjoy. (You don't have to be cash-strapped, I suppose you might just be cheap and altruistic.) Bundle 8 includes seven games at the moment, with two being "above the average price" purchases and a third unlocking at a reasonable $5. 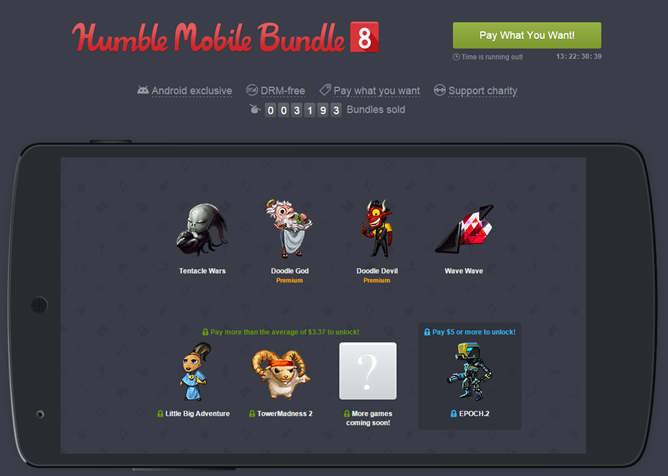 Tentacle Wars is a puzzle-strategy game in which you take control of an alien's immune system to fight off an invading disease. It's $2 in the Play Store. Doodle God and Doodle Devil, both from developer JoyBits, are impressive takes on the "combine stuff to make other stuff" style of puzzle game. They're both $3 in the Play Store. Wave Wave is a f$%^&ing insane game that has you steering a nearly impossible line down an endless corridor, with bitter and hateful defeat waiting for you every few seconds. Normally it would cost you $2.

Little Big Adventure and Tower Madness 2 are both available if you spend more than the average price, which is just over $3 at the time of writing. The former is a classic PC adventure game from 20 years ago, currently $5 in the Play Store, and the latter is a robust tower defense title that regularly goes for $2. Pay more than five bucks and you get Epoch 2, the sequel to the excellent robotic cover based shooter. It goes for $5. The total cost of all seven games is over $20.

As always you can pay as much or a little as you like, splitting the payments up any old how between the game creators, charities Child's Play or the Electronic Frontier Foundation, or the Humble organization. There's still no way to associate Humble Bundle games with the Play Store, but you can download the official Humble app for easy access to your content. More games will surely be added to Mobile Bundle 8 before it expires two weeks from today.

[lolwut] Sony Adds Three New Xperia Apps To The Play Store So You Can Add Ninjas And Stuff To ...