Update: We're getting a few reports that this initial build (213.44.1) may be a soak test, despite the fact that our tipster isn't part of the current soak program. If that's the case, it may be a few days to a few weeks before regular users see the OTA update.

"Better late than never" is almost never said with real sincerity, and such is the case with the latest build of Android for the T-Mobile Moto X. All three of the other carrier versions of Motorola's 2013 flagship have already received the latest version of Android: Sprint, AT&T, and even Verizon. Perhaps the fact that T-Mobile doesn't actually sell the phone has something to do with it - it's only available in a non-contract, unlocked "T-Mobile" edition at full price from Motorola. 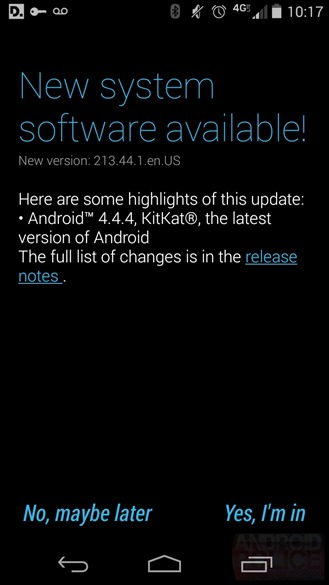 Whatever the reason for the delay, at least some users of the T-Mo Moto X are now getting Android 4.4.4, about three months after the incremental update to 4.4.3. One user was kind enough to show us the over-the-air update message for the Uncarrier, which he received late Monday night. The jump from 4.4.3 and 4.4.4 includes a few security enhancements - we don't have the size of the T-Mobile update, but it shouldn't be too large.

Because this update is coming from Motorola itself and not T-Mobile, you may or may not see the usual carrier practice of a staged rollout. In any case, those who have rooted or otherwise modified their phones might have trouble applying the 4.4.4 OTA, and may lose root if it's successful. Moto X users, if you're interested in even faster updates, there's always CyanogenMod - the T-Mobile Moto X has an unlockable bootloader.

tinyCam Monitor Updated With Wear Support, Lets You Quickly Check An IP Camera From Your Wrist