It looks like Republic Wireless is going for the Motorola hat trick: in addition to last year's flagship Moto X and mid-range Moto G, the American hybrid MVNO is now planning on selling the low-end Moto E to its customers. According to this post on the official Republic blog, the carrier's customized version of the Moto E will go on sale next month for $99, $30 cheaper than the retail GSM model. 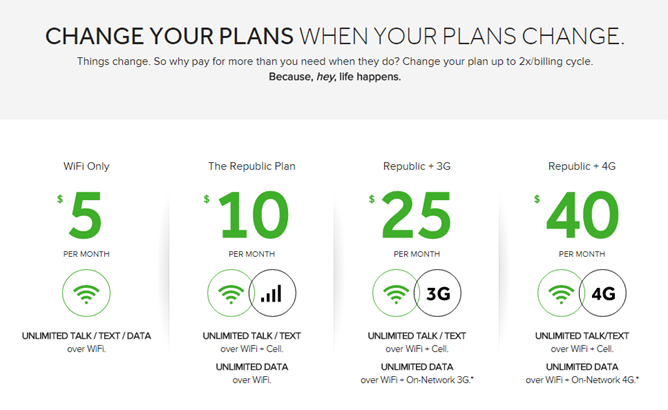 For those of you who haven't looked in a while, the Moto E uses a low-power Snapdragon 200 processor (dual-core, 1.2Ghz), a single gigabyte of RAM, 4GB of storage plus a MicroSD card slot, a 5MP rear camera, and a 4.3-inch 960x540 LCD screen. At $130 it's a pretty good deal, but at a hundred bucks it's a steal... although those looking for a cheap all-purpose phone should probably look again. Republic Wireless uses a unique hybrid Wi-Fi service model, using Wi-Fi data for VOIP calls whenever possible and reverting to a Sprint MVNO everywhere else. That means that Republic phones won't work on other carriers, and the latest changes to its roaming policies make Republic a poor choice for anyone who travels frequently and doesn't have constant Wi-Fi access.

Still, for a hundred bucks and as little as $5 a month, you can get a separate line for your home on a decent little machine, and $25 a month gets you a Sprint phone with unlimited minutes and data over 3G. (The Moto E doesn't have an LTE radio, so the $40 plan isn't an option.) I'm sure there are plenty of frugal smartphone buyers who'll be counting down the days until October.

Simple 2.1 Brings Android Wear Support And The Option To Add Images To Transactions