Hot on the heels of Sprint's launch of the Galaxy Tab S 10.5, AT&T announced that it will begin selling both the 8.4- and 10.5-inch LTE variants online and in stores beginning September 26. The carrier is also taking pre-orders for both tablets right now with a shipping date of September 23. 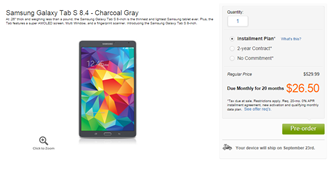 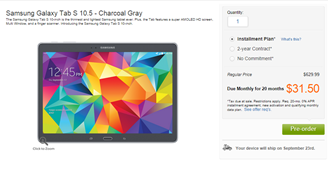 Big Blue is only selling the tablets in charcoal gray, so if you were hoping for white, you're out of luck. As far as specs are concerned, both LTE models of the Galaxy Tab S are identical to their WiFi-only counterparts. You still find an octa-core Exynos 5 processor, 3 GB of RAM, a Super AMOLED display, a fingerprint scanner, and the more updated version of Touchwiz that debuted on the Galaxy S5.

The prices break down as follows:

The LTE versions have been a long time coming, but it's good to see carriers finally beginning to offer these for sale. If you're a Verizon or T-Mobile customer and are interested in one of these tablets, fret not. Both of those carriers have also announced that they will have the Galaxy Tab S at some point, but there is still no news on pricing or availability. Judging by recent FCC filings, Verizon will be getting both the 8.4- and 10.5-inch variants while T-Mobile will follow in Sprint's footsteps and only sell the 10.5.

R.G.B. Is A Simple And Deceptively Difficult Take On The Guitar Hero Formula