Today Amazon popped its yearly Kindle Fire update unannounced, showing off no less than four new models of its customized Android tablet family. The Kindle Fire HD Kids is being covered in this post, but the main event is the refreshed versions of the Kindle Fire HDX 8.9, Fire HD7, and the "all-new" Fire HD 6. These will make up Amazon's new line, scheduled to go on sale in October. 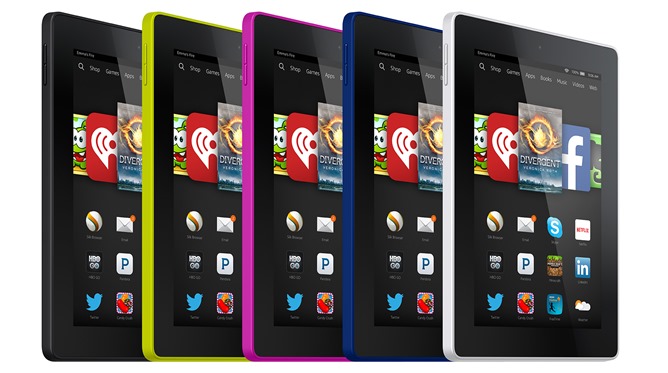 The HD 6 and HD 7 are the new low and mid-range models, though they're basically identical in terms of capability. Amazon says the screens have "over 1 million pixels," which means a 1280x800 panel (1.024 million pixels, if anyone's wondering). They're not saying much about the SoC, only that it runs at up to 1.5Ghz and has "3x the graphics performance of the Samsung Galaxy Tab 4" - which isn't saying much. What is new is that both models are coming in five colors, black, white, yellow, blue, and hot pink (though it's citron, cobalt, and magenta if you ask them), a first for the series. Amazon is also touting the tablets' durability thanks to Gorilla Glass 3. Battery life is claimed at "up to 8 hours." Both tablets get 2MP rear cameras and VGA front-facing cams. 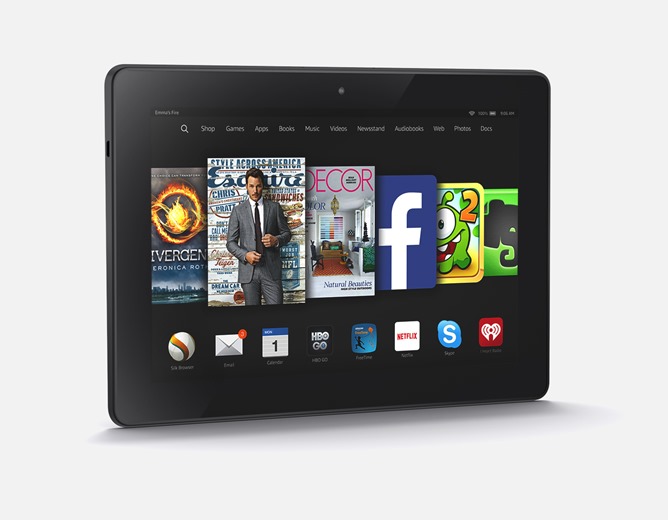 The new Kindle Fire HDX 8.9 has the same screen size as last year's model. The processor is "up to 2.5Ghz," thanks to a Snapdragon 805, and it's paired to 2GB of RAM. The screen has a resolution of 2560x1600, and it includes "100% sRGB color accuracy." The press release says that the HDX is 20% lighter (13.2 ounces) than the iPad Air, the Dolby speakers are twice as loud, and the tablet comes equipped with 802.11ac MIMO Wi-Fi as well as LTE on the more expensive model. Battery life is rated at up to 12 hours, with "weeks of standby battery life" thanks to a Smart Suspend mode. The rear camera is 8MP, while the front-facing cam is just 720p.

The updated HDX doesn't look much different from the old model. For fans of the series it's a nice step up - perhaps not nice enough to warrant a new purchase after just a year, though. The HDX 8.9 gets access to the new Sangria release of FireOS (along with the smaller tablets), Amazon's Mayday Video support, "ASAP" predictive video streaming, Second Screen support for the PS3, PS4, Samsung smart TVs, and of course, the Fire TV set-top box. Strangely, the 7-inch Fire HDX isn't getting updated from last year.

All Kindle Fires can be ordered without Special Offers (ads) for a $15 surcharge. All models are now up for pre-order on Amazon.com.