Three more titles have made their way into Humble Mobile Bundle 7, packing more value into a pack of games that was already worth it for Kingdom Rush Frontiers alone. Now—in addition to that awesome game, Color Zen Premium, Heroes of Loot, Horn, and Sorcery—people who pay over the average can also get Alpha Wave, Soda Drinker Pro, and Swordigo. We've written up a review for that last one, so check it out if you don't already have the game. As for Soda Drinker Pro, it's a first-person beverage drinking simulator designed for Google Cardboard. I know, everything about that sentence sounds made up, but it's totally legit.

For people who aren't yet familiar with Humble Bundle, here's how the process works. The site provides a selection of nice games, and people are welcome to pay whatever price they want for them. Those who pay over the average (which currently sits at $4.10) get the full set of titles. Everyone else will just get Color Zen Premium, Heroes of Loot, and The Tiny Band Story. A proportion of the proceeds goes to charity, so there's little reason to be stingy here. 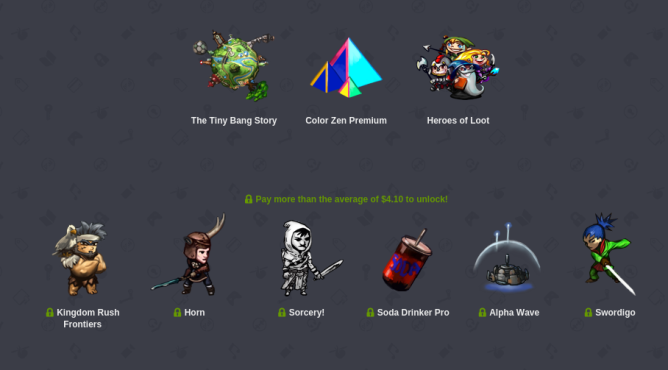 But here's the thing. You don't have to pony up four bucks if you don't want to. We have 10 free codes to give away courtesy of Humble Bundle. Want them? Here's what you need to know.

We've got 10 codes that grant access to the full bundle of nine games. If you want to enter the drawing for a code, just leave a comment below. We'll choose 10 random winners tomorrow (September 18th). Good luck!