With its first wearable, the Shine, Misfit took a different approach to the whole activity tracking thing. Its spherical device wasn't tied to a bracelet like its competitors', it could be popped inside of a necklace or strapped to a belt as well. And forget days of battery life, this thing could go for months. The product was compelling, but at $129.99, it wasn't cheap, so Misfit is addressing that with its second go at the market, the Flash.

The Flash has the same core design as the Shine. It's still a weird, funky UFO looking thing outlined by LED lights. It still tracks steps, calories, distance, and sleep. It's still capable of telling the time in its own peculiar way. It also doesn't require charging and instead draws its juice from a watch battery (which should last up to six months). What's different this time around is the build quality. Rather than a metal disc-shaped thing, the Flash is a plastic one.

This change in build material has an effect on price. The Flash goes for just $50, which is half the price Misfit wants for the Shine these days. The Flash is available for pre-order now in seven colors, and units will ship sometime in mid-October. Anyone interested can claim one directly on Misfit's site. 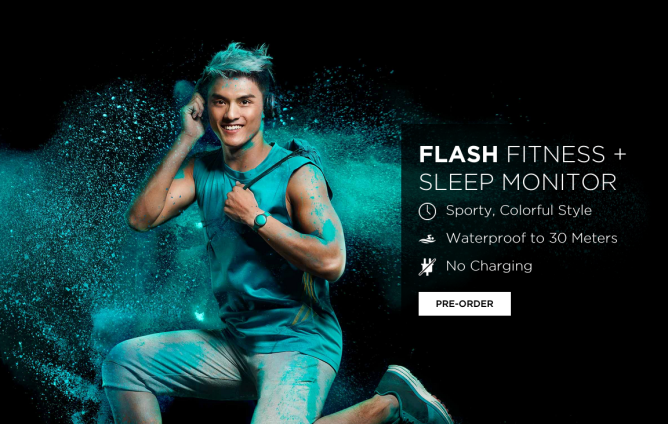 The Flash will continue to sync with the same app as the Shine, which requires a device running Android 4.3 or higher and Bluetooth 4.1. The app is available for free below. “Flash is the only fully featured activity and sleep tracker in the world for under $50, making it an incredible value”

Crafted out of a special soft-touch plastic, Flash is comfortable, extremely durable, and waterproof to 30 meters, making it fit for even the toughest uses. It comes in seven unique colors including a lemon-lime Zest, funky Fuchsia, and minimalist Frost.

“Flash is the only fully featured activity and sleep tracker in the world for under $50, making it an incredible value,” said Tim Golnik, VP of Product and Design at Misfit.

Like Shine, Flash never requires charging and can be worn virtually anywhere — on a user’s wrist, pants, shirt, shoes, lapel, or even on a keychain. Flash includes the very best of Shine’s user experience and automatically measures steps, calories, distance, sleep quality and duration, and even tracks cycling and swimming. The entire front of Flash is a button; to check your progress toward your daily activity goal and the time of day, simply press it. Flash syncs wirelessly with the Misfit App on iOS and Android phones.

Available for $49.99 in the United States, Flash will be available at Best Buy, Target, Amazon, Walmart and other retailers worldwide in October, and can be pre-ordered now at misfit.com/flash.

Flash was originally created in partnership with The Coca-Cola Company, Misfit’s long-term strategic partner, to encourage active lifestyles globally. Misfit’s first product, Shine, launched in late 2013, and is now available in tens of thousands of retail locations in over 40 countries.

Google Renames Maps Engine To 'My Maps,' Introduces A New Logo And Other Small Improvements